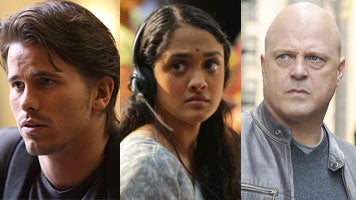 When NBC’s new entertainment president, Bob Greenblatt, renewed “The Office,” “Parks and Recreation,” and “Community” on Thursday, he conspicuously left out two shows in the network’s Thursday night comedy block.

The renewed shows, along with “30 Rock,” Greenblatt said, “represent the best of what the NBC comedy brand stands for in terms of originality, wit and sophistication.”

But he left out “Perfect Couples” and “Outsourced.”

Also read: The Lowdown on ‘Wonder Woman,’ ‘Alcatraz,’ and Every Other Fall Pilot

Still, there’s reason to believe that these six shows are on the extinction list. Here are a few reasons why:

“Detroit 187” (ABC)
The quality cop ensemble, led by former “Sopranos” player Michael Imperioli, has an enthusiastic following, but that core audience doesn’t seem big enough to justify renewal. So far, the show averages just a paltry 1.7 in the key 18-49 demo, despite 7.5 million total viewers overall. The show aired what may well be its final episode Sunday. “No Ordinary Family” (ABC)
Don’t take it from us: The show’s stars, Michael Chilkis and Julie Benz, have both signed on to CBS pilots. The series has averaged a 2.0 rating/5 share in the demo and 6.7 million total viewers — decidedly mortal numbers that were weighted towards the beginning of the season, when people were still curious about the show. “No Ordinary Family” would need superpowers to survive.

“Traffic Light” (FOX)
This under-the-radar show also follows the “Friends” model — also without scoring “Friends” ratings (as its 1.8/5 average in adults and 4.3 million viewers this season indicates). Following rock-solid “Glee” and “Raising Hope” on the schedule somehow hasn’t helped, possibly because they’re each such different programs. By the time “Traffic Light” comes on at 9:30, viewers are likely out of the groove.

“The Event” (NBC)
The network had high hopes for this big-idea show, which it launched with much hype. Though “The Event” has averaged a 2.8/7 in the key adult demo and 8.3 million viewers, it has slid significantly since its debut. Casual viewers haven’t had an easy time with the many mysteries piled on top of mysteries — and the show going off the air for months didn’t help matters, either. Still, we want so many of these storylines resolved — for example, what’s up with the “old-man face” on those little girls, and will there really be an alien invasion? — so hopefully NBC will surprise us here. “Outsourced” (NBC)
This much-maligned rookie has drawn criticism from people either offended by the idea of a show focused on the outsourcing of labor or a show about Indian storylines (though its producers would argue that they’re deflating those stereotypes). Tension and controversy can make for succesful comedy, but in this case they haven’t. The show has a steadily declining average of 2.5/7 in the demo and 5.4 million total viewers. Of course, quirky, low-rated comedies haven’t necessarily died a lot of fiery deaths on NBC’s Thursday-night schedule in recent years — hey, “Parks and Rec” and “Community” are still on the schedule — but this show’s numbers are pushing it. That, plus no early vote of confidence from Greenblatt, suggests “Outsourced” may be out of a job.

“Perfect Couples” (NBC)
Despite also sharing a night with “The Office” and featuring geek goddess Olivia Munn, this “Friends”-model show has averaged an unimpressive rating of 1.7/4 during its short run, and rakes in just 3.4 million viewers on average. Thursday’s episode stumbled to 1.2/4 and 2.9 million, losing a whopping 1.3 million viewers from its lead-in, “Community.” NBC has to have something in its pilot pile that would do better than this.