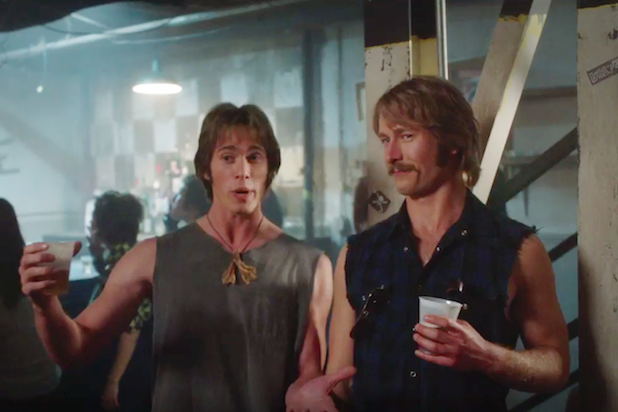 At a time when the excess of movies about privileged white dudes is being seriously questioned, a film like “Everybody Wants Some!!” might be a bit of a hard sell for some audiences, even if it’s from a seasoned auteur like Richard Linklater.

This is an uninhibited, unashamed college party movie; a slice-of-life piece of bros being bros with no overarching conflict. Except for one female love interest and one black teammate, everyone in the main cast is an athletic white guy with a level of attractiveness ranging from awkwardly cute to hotter than thermite. How can these guys be relatable to a wide audience?

Also Read: If 'Everybody Wants Some!!' Made You Miss 1980, These Films Will Cure That (Photos)

Ah, but this is Linklater, master of the mundane. He is a screenwriter who loves to reveal the values, desires, and intelligence of his characters by having them engage each other in conversational philosophy, or as the guys in “Everybody Wants Some!!” would call it, shooting the shit.

Linklater’s “Dazed and Confused” is built almost entirely on this kind of dialogue. “Before Sunrise” and its sequels show a romantic relationship slowly develop through long talks about issues within and without. “Boyhood” shows the many moments in which Mason’s personal identity is shaped by the questions he asks his father and the advice he gets back over the course of his childhood.

So, too, does shooting the shit form the core of “EWS!!,” but this time it takes a very unique flavor. In “Dazed,” the moments of truly philosophical dialogue were largely reserved for Cynthia, Tony, and Mike — the intellectuals of the cast. A few similar moments were also spared for Pink, the rebellious quarterback. But for the most part, there weren’t many memorable moments of insightfulness for the dopier kids in the school.

In “EWS!!” it’s the beer-chugging, prank-loving, sex-seeking dudes who get the chance to impart wisdom. Though more crude in their delivery, their observations are no less astute than those in Linklater’s past works. They speak of the importance of having a sense of humor about yourself (“We all take turns being chumps. You just have to accept your chumpification and pass it on!”) They talk about the importance of “embracing your inner strange” and how their seemingly trivial games of darts and ping-pong are crucial to their success on the baseball field.

It’s also not just what they’re saying, but where they’re saying it. These philosophical talks over beers happen at the disco, country bars, mosh pits, and lavish costume parties. “Dazed and Confused” showed the perspectives of a wide range of social cliques; but most of the time those cliques stuck to themselves, only occasionally brushing against each other.

“Everybody Wants Some!!” shows everything from the perspective of the jocks, but ramps up the interaction between the cliques. In each encounter, the guys often find themselves bewildered at being out of their element, but never do they look down upon the folks whose worlds they are visiting. They dive head first into each experience, and each time they soon find themselves having a great time.

What Linklater has made here is one of the most joyful exercises in empathy in recent cinematic memory. He takes a group of guys who are at first glance the embodiment of the “dumb jock” stereotype, and after briefly making it look like they’ll be nothing but dumb jocks for the next two hours, he melts the stereotype away and leaves a unique individual in its place. By extending his trademark philosophical chats to these Grade-A bros, Linklater shows how such talks are not only shared by people from all walks of life, but are key to how we grow as human beings.

The lessons in life that truly stick don’t come in a classroom — both “Dazed” and “EWS!!” don’t care in the slightest for the actual educational aspects of high school and college — they come from hanging out with others and sharing ideas with them. They can be friends or complete strangers, but it’s these interactions that expand our worldview. They can come while cuddling with a loved one, debating a colleague over coffee, or in this case, taking superhuman rips from a bong at an off-campus rager.

If 'Everybody Wants Some!!' Made You Miss 1980, These Films Will Cure That (Photos)

It wasn’t all about getting high and going to discos

Richard Linklater's "Everybody Wants Some!!" makes 1980 seem like a year that everyone got high, hooked up at discos, and played knuckles in too-tight shorts. It was. But it was also a cinematic goldmine because of all the grim drama that went down in that pivotal, recessionary year.

In Linklater's 1970s set-classic "Dazed and Confused," one stoned teen speculates that the 1980s might be "awesome." Were they? You tell us.