It’s good to be alive, turtle says: “Extinct or Alive” on Animal Planet just found its first species that was previously believed to be extinct, is actually alive.

During filming this week, series host and biologist Forrest Galante found a female Fernandina Tortoise, presumed extinct since 1906, on a remote volcanic island in the Galapagos.

The discovery was made on Feb. 17 after two days of searching. On Wednesday, an Animal Planet spokeswoman told TheWrap the cable channel just “finished our verification process,” and that the find checks out.

The whole thing will unfold in an episode that airs this summer.

A team of international turtle biologists at the Turtle Conservancy studied photos and video of the tortoise and confirmed it is likely to be Chelonoidis phantasticus.

“Since only one other specimen of this species has ever been found (a deceased male collected in 1906), we have never seen a female of the species,” Anders Rhodin of the Turtle Conservancy and IUCN specialist group said. “The photos from the team clearly show a moderately saddle-backed, old female about half to two-thirds the size of the known male. Pending genetic confirmation, this is almost undoubtedly the lost Fernandina Giant Tortoise.”

The tortoise is “in good health” but “underweight,” Animal Planet said, “unsurprising considering the sparse vegetation in the area she lived in on the volcano.”

She’s now at the Fausto Llerena Tortoise Breeding Center, a national park facility in Isla Santa Cruz, Ecuador. The hope is for “sperm retention, fertile eggs and offspring,” Animal Planet said. New searches will look for male Fernandina Tortoises that she could potentially mate with to save the species.

Below is a photo of Galante and his hero in a half shell: 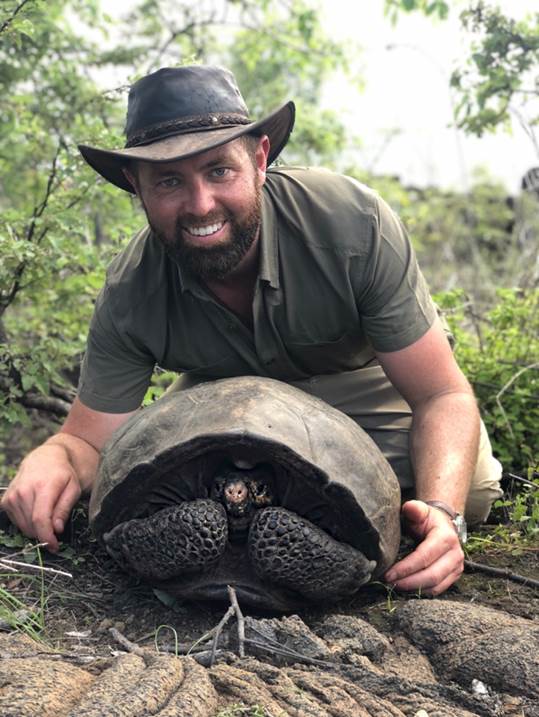 “As a biologist and someone who has dedicated my life to the pursuit of animals believed extinct, this is by far my greatest scientific accomplishment and proudest moment,” said Galante. “Much like Lonesome George was an icon of extinction, I believe she can become an icon of wildlife hope. She’s the rarest tortoise, if not animal, in the entire world and one of the largest discoveries in the Galapagos in the last century.”

“We are moved and excited about this historic news,” said Susanna Dinnage, global president of Animal Planet. “As the rate of animal extinction is widely debated, it gives us great hope that some species are surviving against the odds and that at Animal Planet we can do our bit to celebrate and support them.”