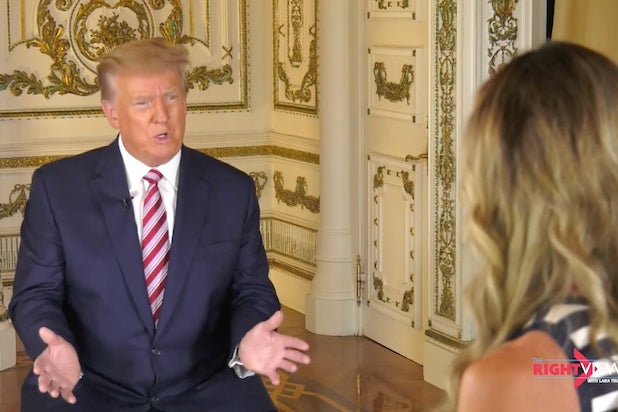 The Right View With Lara Trump

The younger Trump, who was brought on as a Fox News contributor this week, posted screenshots of email messages from Facebook staff on her Instagram account. The emails reminded her that “content posted on Facebook and Instagram in the voice of President Trump is not currently allowed” following his ban from the platforms.

“We are reaching out to let you that we removed content from Lara Trump’s Facebook page that featured President Trump speaking,” one email said. “In line with the block we placed on Donald Trump’s Facebook and Instagram accounts, further content posted in the voice of Donald Trump will be removed and result in additional limitations on the accounts.”

A Facebook source confirmed the legitimacy of the posted emails to TheWrap, but had nothing further to add.

Trump touted her interview with her father-in-law on Twitter and her podcast Tuesday, promising viewers “a HUGE guest.”

On Wednesday morning’s “Fox & Friends,” Trump’s new colleagues rallied behind her, calling the removal of her interview content “unbelievable” and “incredible.”

“Do you realize he is the former president of the United States? You do an interview with him, and it’s not worthy? It’s not allowed to be on your page?” Brian Kilmeade asked.