Fall TV’s premiere week is in the books — at least, Nielsen’s — and we’ve officially got every new and returning broadcast series’ lifts from three days of delayed viewing. We won’t bore you with all of them, just the Top 20.

Although football remains flat, NBC’s Sunday and CBS’ Thursday primetime NFL games still stayed on top. The usual suspects like “Empire” and “The Big Bang Theory” followed, but one new series sneaked into the top five. NBC’s “This Is Us” debut actually lifted above its “Voice” premiere lead-in with the benefit of three days worth of delayed viewing.

Two episodes of the singing competition and three ABC series — “Modern Family, “Designated Survivor” and “Grey’s Anatomy” — round out the Top 10. The Kiefer Sutherland action thriller made some history this week with its seven day delayed viewing lift — read all about that here.

Scroll down for the Top 20 broadcast shows from the advertiser-coveted 18-49 demographic with three days’ worth of delayed viewing. Each episode’s growth from its “live” viewing is listed to the right of the rating.

As readers can see in the chart, the top five movers (of the 20 biggest shows, at least) were “Designated Survivor,” “Law and Order: SVU,” “This Is Us,” “Modern Family” and “Grey’s.”

The full snapshot for Week 1 is below one more relevant “Also Read.” 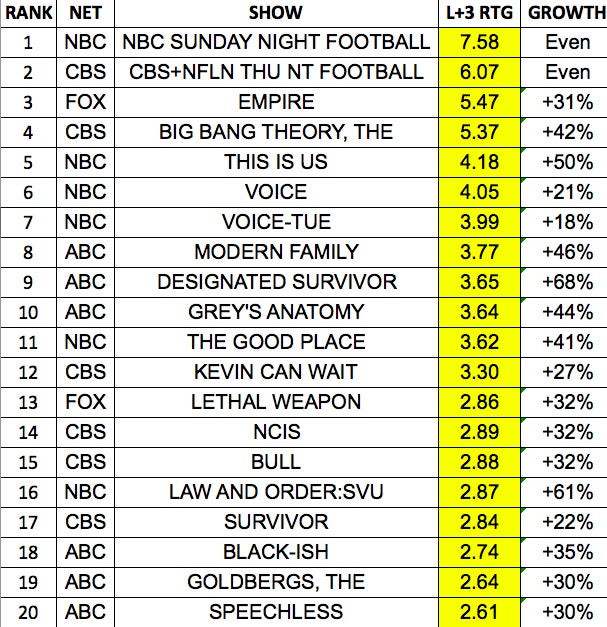