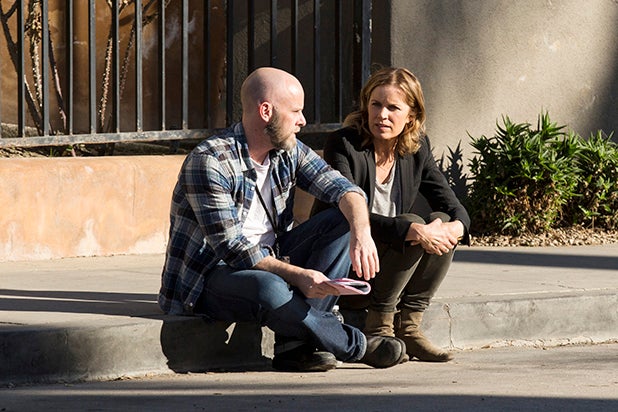 AMC’s “Fear the Walking Dead” explores how the world became the place viewers flocked to in the original phenomenon “The Walking Dead.” But executive producer Dave Erickson thinks there’s something even more compelling than zombies: family dysfunction.

At the beginning of the pilot, the family is preoccupied because Nick has disappeared — not for the first time — but  soon finds much bigger problems as a mysterious virus apparently begins turning regular citizens into flesh-eating monsters.

For Erickson, it’s the problems inherent in the family dynamic, set against the impending zombie apocalypse, that makes the spinoff not only watchable, but a completely different thing than producer Robert Kirkman’s original series.

“The mythology is established… I think the larger difference was our entry point into it,” Erickson told TheWrap. “Being able to start at a much slower pace, establish our family, sort of live with their problems and their conflicts for an extended period of time. What we did was lay a lot of track so that every problem that exists for them — addiction, divorce, trying to blend a family — all those things that seem pretty universal really become the lifeblood of the show. And then there are zombies.”

Below, Erickson talks about how to make a show for a deeply-rooted fanbase and new viewers alike, how the series will stay its own entity as it gets more and more taken over by zombies, and why he watched “Apocalypse Now” multiple times in preparation.

What was it like for you coming into a franchise that’s six seasons in? Was the universe already pretty well established?
The mythology is established, the universe. Robert did that with the comics and continues to do that with the show. So as far as the Walkers and how they mature and how you kill them, all of that was pretty well set up. I think the larger difference was our entry point into it.

How do you approach a spinoff like this, where not every new viewer might be familiar with the original show’s mythology?
We never sat down and said, how do we write something that appeals to everyone, how do we appeal to fans of the original show and appeal to new viewers. We really just started fundamentally with this one family and their dysfunction and tried to build a story off of that.

As the world on “Fear” gets taken over more and more by zombies, how is it going to stay distinct from “The Walking Dead”?
We have enough real estate going into Season 2. Rick [Grimes, “The Walking Dead’s” lead character] woke up four or five weeks into the apocalypse. If you count the days, we’re probably at about Week 3. We actually have more discovery to come in Season 2. In Season 3, I’ll figure Season 3. There’s themes that start in the pilot. We have an opportunity to explore a coming of age story for our teenage characters, for Nick and Chris and Alicia, in a way that’s specific to our show. There’s a story about how do you come of age in a world where nobody comes of age anymore? What does that do to them specifically?

I watched and re-watched “Apocalypse Now” before we started the show and for me, in terms of the narrative arc, there’s something very compelling about that film and the themes of that film. What is madness and when does madness become your only method of survival? That’s obviously something they’re going through with Rick right now. There are certain characters where I would like to see that trajectory play out.

And at that point, presumably “Fear” becomes more of a parallel show than a prequel.
Really it’s a parallel narrative right now. I’d like to live in a world where we buy ourselves some time and explore elements that they had to get to a lot quicker on the original show. There’s room in Season 2 to do that.