(ALSO READ: "Putting the Pedal to the Metal: the ‘IM2’ Merchandising Blitz.")
“Iron Man 2,” the movie that’ll kick off the 2010 summer season at the boxoffice, is an unwatchable travesty.
And it’s awesome.
Which is to say, opinion is sharply divided on the second installment in the adventures of Robert Downey Jr., as the ultra-rich tycoon and egomaniac Tony Stark, who transformed himself into a heavy metal superhero in the first “Iron Man” and this time faces off against Mickey Rourke’s Whiplash. 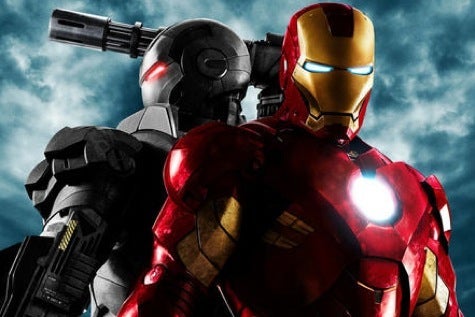 The embargo on reviews lifted on Wednesday, and the first batch of reactions range from a flat-out rave, full of exclamation points and words in all caps, to a vicious pan that calls the Jon Favreau film “the ultimate masterclass in how not to make a movie.”
The good news for Paramount is that judging from the reviews, the film hits its target audience squarely. The biggest rave comes from Harry Knowles at Ain’t It Cool News, an admitted comic geek who runs a site that’s known for its affection for boy movies. Knowles coins a new word, “AWESOMERY,” says “The entire last act just f—ing rocks balls,” and pronounces the whole thing “comic movie crack!”

And at Hit Fix, Drew McWeeny – an alumnus of, guess what, Ain’t It Cool News – calls the sequel “the victory lap” and “a blast of pure confidence and charisma, absolutely effective.” Plus he loves seeing Scarlett Johansson in IMAX. (“Ka-pow,” says he.)

(Photo of Favreau, Downey and Johansson at the "Iron Man 2" premiere by Kevin Winter/Getty Images.)
But then we come to the reviewers who don’t proudly proclaim their comic-nerd bona fides – and here, the reaction suggests “Iron Man” may not be a slam-dunk beyond the diehards.
At the Hey You Guys UK Movie blog, Gary Phillips calls it “a pretty damn good ride,” but he’s also underwhelmed by its “worryingly boring, pointless and highly confusing moments.” His conclusion is that it’s nowhere near as good as the first film, but it still sort of works. Barely.
Edward Douglas, at comingsoon.net, offers a mixed take: It’s got problems, it’s not as good as the first one, but it’s still effective. “It may be hard for anyone to claim that ‘Iron Man 2’ is nearly as mind-blowingly amazing as the first movie was for its time, though it’s still better than 95 percent of the movies based on Marvel Comics characters.”
Variety is also mixed, but its compliments are even more backhanded: "’Iron Man 2’ isn’t as much fun as its predecessor, but by the time the smoke clears, it’ll do.” Brian Lowry says the film is more predictable and uneven than the first film, but that an impressive final action sequence delivers the goods.
Total Film loves the first act, hates the “surprisingly dull” middle section and is impressed by the finale – though in the end, Neil Smith says, “You’re likely to leave feeling short-changed.”

The Hollywood Reporter, on the other hand, rips the new film: “Everything fun and terrific about ‘Iron Man,’ a mere two years ago, has vanished with its sequel.” Kirk Honeycutt likes some of the action scenes, and he likes Johansson “in various stages of dress and undress,” but otherwise he’s distinctly unimpressed.

But his review sounds like a rave compared to the attack in the British publication the Mirror (the first “Iron Man 2” review, they proudly trumpet), whose David Edwards says the movie is “a mind-numblingly dull, chaotic and often unwatchable muddle.” And he thinks the character of Iron Man isn’t even in the movie often enough.
News of the World, another British paper, more or less agreed, after a tease: “It’s got everything you want from an Iron Man movie … Problem is, that bit’s about three minutes long, and comes at the end of a stupefyingly dull two hours of everything you DON’T want from an Iron Man movie.”
And the British blog Slashing the Seats agreed: “I’m sorry guys, but after all the hype, all the great-looking trailers, and all the shots of Scarlet Johanssen’s bottom, this is a massive disappointment.”

Still, at the moment “Iron Man 2” is sitting at 70 percent positive on Rotten Tomatoes – although that rating comes from just a dozen reviews. More will follow shortly.