As expected, the hosts of Fox News’ “Fox & Friends” were none too pleased with Joe Biden’s student loan debt relief plan that was announced on Wednesday. According to the hosts, it’s just a means for the president to buy votes, and it flies in the face of personal financial choices.

Though some details on qualifying for Biden’s plan remain unclear, the core of the plan is this: the federal government will forgive up to $20,000 of student loan debt for Pell Grant recipients, and up to $10,000 for others who qualify but didn’t receive those grants, for borrowers making under $125,000 a year. In response, many conservatives and Republicans have been outraged, calling it socialism, and a “slap in the face” to people who already paid off their student loans.

On “Fox & Friends” Thursday morning, the hosts predictably fell into that camp, with Steve Doocy suggesting that Biden’s plan is actually just a form of bribery, considering how close midterm elections are at this point, as well as the start of his own bid for re-election.

“Is Joe Biden buying votes for $10,000 vote?” he said. “Keep in mind, this is one of those things that has been on his checklist. He’s gotta motivate his base, and what they’re doing is they’re gonna cancel student debt for 40 million Americans.” 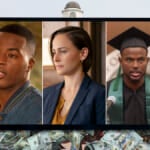 Of course, Biden’s plan will not completely cancel out student loan debt, as laid out above.

Doocy and his cohosts called the plan “absolutely outrageous,” and reiterated common talking points of those opposed to it, arguing that no one is ever forced to go to an expensive college and take on student loan debt, and that this plan “hacks off” the people who specifically chose not to do that, as well as those who were in good enough personal circumstances to be able to pay off those loans.

“That is called a financial decision that we make every single day,” Brian Kilmeade said. “You don’t have an obligation to go to a $70,000 school. If you are lucky enough and your parents can afford it, if you choose to do it, these are all your personal decisions. It’s not the president’s decision to say it’s unfair to do this.”

Kilmeade also suggested that Biden should’ve instead offered auto loan forgiveness, or mortgage forgiveness, considering how people have struggled with those payments in the pandemic.