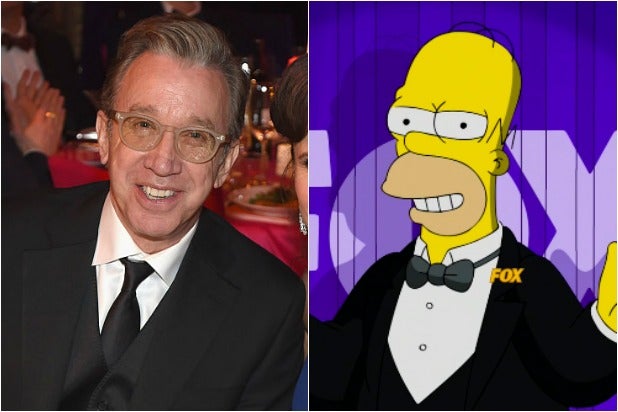 Both Homer Simpson and Tim Allen took the stage during Fox’s 2018 upfront broadcast presentation at the Beacon Theatre in New York City Monday — and the last man standing was actually the cartoon.

Dana Walden and Gary Newman, Chairmen and CEOs, Fox Television asked both the star of the longest-running scripted series in network history and the lead of the network’s recently-announced revival of the ABC sitcom “Last Man Standing,” to say a few words, and while Homer killed it, Allen totally bombed. Well, one is animated to begin with.

“Homer Simpson here for ‘The Simpsons,’ who just passed ‘Gunsmoke’ for the most episodes ever,” the patriarch of the the most famous family from Springfield said in a projection on the big screen, while donning a dapper tux. “Which is lucky, cause CBS just picked up a reboot of ‘Gunsmoke.’ It’s a little young for their viewers, but I wish them luck.”

“Over the years, ‘The Simpsons’ have made predictions that have eerily come true,” Homer continued. “America winning Olympic gold at curling. Trump winning the presidency. And Disney buying Fox for its No. 1 asset: convenient parking for Century City. Gary and Dana have asked me to use our predictive powers for the future. And so, due to short orders, the next reboot of ’24’ will be called ‘Six.’ There will still be seven words you can’t say on TV, and President Trump will say them all during the State of the Union. Due to declining ratings, ABC will launch a new show called ‘0.8’ is enough. Following reboots of ‘Roseanne,’ ‘Will & Grace,’ and ‘Murphy Brown,’ Fox is bringing its own classics back to life: ‘Skin,’ ‘John Doe’ and ‘Herman’s Head.’ Finally, and most frightening, Apple and Crackle will partner for a new network called Crapple.”

Homer’s bit had the audience laughing the whole way through, but then it was Allen’s — the newest, old Fox star — turn to address the advertisers and press. And, uh, he might want to work on his material before his working-class sitcom returns this fall.

“There are certain things in life you just know have reached their end, including the mayonnaise in the green room — wow, ugh,” Allen opened, after also thanking Walden and Newman, because of course. “But last year, ‘Last Man Standing’ wasn’t one of those things, you know?”

“I was considering after the show got off I was going to move on to other stuff, like some darker movie parts,” Allen continued. “We had one set up, ‘Santa vs. Alien,’ which — huh. I thought reality TV would be good, ‘Naked and Really Afraid.’ And the reason I bring that up is because, actually, one of my best buddies — real story — is the editor on ‘Naked and Afraid.’ And one day I said, ‘You’ve seen enough views of men climbing up dirt without any pants on, that you actually prefer one to another.’ And he goes, ‘Yeah that actually happens. You go, ‘Yeah that’s not a bad look at one right there.’ That’s a disgusting thing I just brought up.”

That whole bit got a few snickers from a mostly tough crowd.

“But the reality is here the fans of ‘Last Man Standing’ wouldn’t leave this alone,” Allen added. “It was really quite remarkable. And you’ve gotta give Fox, and specifically Dana and Gary, big credit for listening to these fans. The threats, I mean. Making the bold move to bring ‘Last Man Standing’ to Fox. It was — Fox was focused like a freakin’ machine. I’m telling you. You should see the complicated process to bring a show from one network to another. The great cast, the writers, the production crew. We can bring literally 8 million of the most passionate and appreciative fans to a big new network — and a big new Friday night. And I just remember, and I told my cast, where we left off: Sixth inning, bases loaded, last man standing at bat, and I’m pointing to that left field, man. I say we go kick some Nielsen ass. Oh, s–t, I said ass.”

OK, just so we’re clear, with the “Last Man Standing” revival just announced a week ago, and “The Simpsons” going into their 30th season on Fox this fall, one definitely had more time to work on their material, right?