TheWrap magazine: ”My first reaction was sort of a slight panic,“ production designer Adam Stockhausen says of the sheer number of designs he needed to create

This story about the production design of “The French Dispatch” first appeared in the Below-the-Line issue of TheWrap’s awards magazine.

When Adam Stockhausen first read the script to Wes Anderson’s “The French Dispatch,” he saw that its unusual structure could be trouble. The film is an anthology of sorts, a series of stories that take place in different locations and are only tied together by the fact that they’re being written about in a New Yorker-ish magazine called The French Dispatch — which, for a production designer, meant that he would have a lot of different things to design.

“My first reaction was sort of a slight panic, just because the scale of it and the scope of it was evident on the page,” said the designer whose other work includes the new “West Side Story,” “12 Years a Slave” and the Anderson movies “The Grand Budapest Hotel” (for which he won an Oscar), “Isle of Dogs” and “Moonrise Kingdom.” “The first step was just trying to wrap my arms around the complexity of the thing.”

Stockhausen was able to start with “The Cycling Reporter,” a prologue of sorts featuring Owen Wilson delivering a tour of the fictional French town of Ennui-sur-Blasé. “It was a great place to start,” he said, “because all the stories connected through the town.”

His frames of reference included films like “The Red Balloon” and the work of Jacques Tati, as well as Hollywood films about France like “Irma la Douce.” He also turned to the 19th-century street photographer Charles Marville, who documented neighborhoods before they were torn down and replaced by grand boulevards during Haussmann’s reconstruction of Paris. 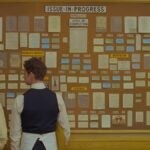 The film was shot entirely in the small town of Angoulême in southwestern France, with some existing buildings serving as locations and an abandoned factory turned into a prison for a story starring Benicio del Toro as an inmate who paints and Lea Seydoux as a guard who becomes his muse. “We would walk around the town and find options for specific scenes,” Stockhausen said. “Where’s the spot where the kids on Vespas arrive at the café, and we see them from a high angle up the stairs? Where do we have the boom shot in the mob quarter that comes down and finds people smoking? Where’s the gutter where water floods out when the city is waking up?

“We’d talk about them and then walk around again and debate some more, and they would gradually lock into place.”

But the town served as far more than just a setting for exterior locations. “This was not going to be a satellite location town where we’d shoot the rest of the movie in Paris or at a major studio,” Stockhausen said. “We were going to locate entirely there, and the factory outside of town became our movie studio where we could build sets.”

Those sets included the French Dispatch magazine’s artfully cluttered offices, which were inspired by James Thurber’s illustrations of the New Yorker offices and filled with suitable items by set decorator Rena DeAngelo. “She found and discussed every single one of those objects and pieces of furniture with Wes,” he said.

The exterior of that office building (above) is the film’s most iconic look, because it’s featured in the movie’s posters and its opening sequence. “The lower three stories of the building are fairly real, although we put false fronts on all the buildings,” he said. “I think it was a driving school and a little internet café and stuff like that, and so we false-fronted on it. And then the top story and the sign is all done as a miniature composited in.”

But that’s not the only bit of fakery in the scene. “The two buildings on either side of the foreground are really interesting because they’re not anywhere near full-size,” he said. “They’re sort of quarter-size, maybe. And we had to build them and put them on these crazy rigs so they would be six feet up in the air and twisted at angles you wouldn’t believe. They had to work with the lens, and the lens was eight feet in the air and tilted up at 11 degrees or something like that. And our buildings had to have the same tilt and then also taper in slightly.

“It was quite a process, and it had to be set up overnight, because of course it was in the middle of a bus stop. The town was happy to let us do it, but they said, ‘OK, but set it up in one night and get it out the next day.”

Additional photos and designs below.

Above, Adam Stockhausen’s design for the story wall in the office, and a scene in that office.

Another design for the office, and a scene with Wally Wolodarsky, Bill Murray and Owen Wilson in the cluttered office.

Timothée Chalamet and Frances McDormand in a street scene that makes use of leftover props from other scenes in the film.

A street in Angoulême, equipped with a newsstand selling the French Dispatch.