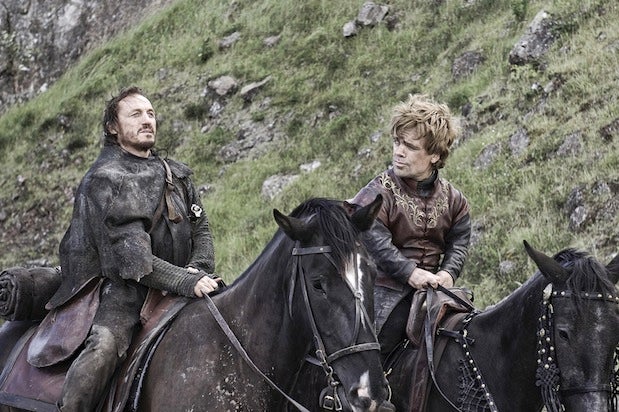 (Spoiler Alert: Contains plot details for the latest episode of “Game of Thrones”)

As the North prepares for bloodshed, two of the surliest, most jaded members of the “Game of Thrones” cast made their return. One was expected, but the other was a huge shocker.

After being left for dead in season 4 by Arya Stark, the man known as The Hound, Sandor Clegane, has returned. He seems to be giving a life of peace a try, joining what looks like the Westeros equivalent of a rehab clinic to get over his killing ways. But in Westeros, the deeds of the past often come back to haunt you, and bad habits always die hard.

Sandor Clegane is tortured by the ghosts of his past, and it adds such interesting depth to his character. #GameofThrones

thoughts – 1) okay, apparently The Hound is the Magneto of the Game of Thrones Universe. #GameOfThrones #GETHYPE #CLEGANEBOWLConfirmed

That Brienne beatdown made the Hound join Habitat for Humanity. #DemThrones #GameofThrones

The Hound after tonight’s episode pic.twitter.com/y8AKKpbaVB

Meanwhile, at Riverrun, another smart-mouthed warrior returned to our screens. Bronn, who was once upon a time a sellsword in Tyrion’s employ, has reunited with Jaime as the Kingslayer attempts to take back Riverrun from the Blackfish and the remnants of House Tully. We haven’t seen Bronn and Jaime together since their adventures in Dorne last season, but when he came back, Bronn wasted no time getting back into his snarky old ways.

If this were 24, Bronn would have returned by, like, killing 15 dudes in two seconds, Tony Almeda style. #GameofThrones

Bronn & the Hound are stone-cold dirtbags. Two of my favorite dirtbags ever. #GoT

Bronn and Jaime, together again. What did Jaime offer Bronn this time? Two wives?

There’s a lot to remember in this episode, but never forget: Bronn is the best. pic.twitter.com/oTZEnDRUYK

This season of "Game of Thrones" has been a godsend for fans who love to craft theories about what big twists lie ahead. Bran, Tyrion, and Sansa have all been the subjects of theories with major ramifications. But for every "Tyrion Targaryen" theory, there's another one that has either been disproved by recent events or is so preposterous it would make Robert Baratheon roar with laughter.