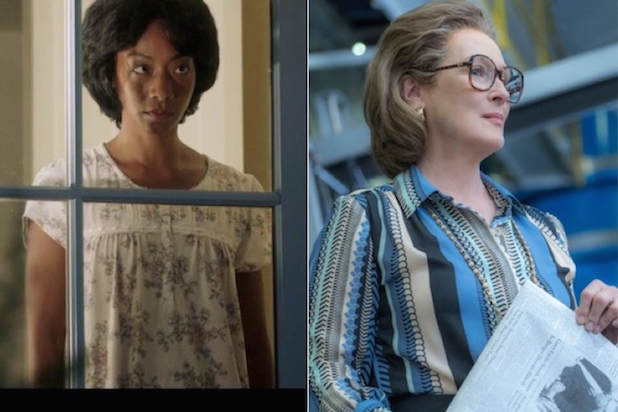 Finally, it’s time for Academy members to vote for the Oscars.

But who will be getting their votes?

From the looks of the guild nominations so far, “Get Out” and “Lady Bird” will, for sure. And then things get interesting.

Part of the interest comes because the Academy has nearly 600 new members, many of them based internationally. That’s enough to push the total number of eligible Oscars voters over the 7,000 mark and skew the vote in unexpected directions, if all the newcomers exercise their right to vote.

To that end, the Academy sent an email to its members on Thursday, the day before Oscars nomination voting began, offering “five things you need to know before you vote.”

Those things were: 1) a three-sentence explanation of how the preferential voting system works in its most basic form; 2) a reminder that the more films you list on your ballot, the likelier the ballot will be to influence the outcome of the election; 3) a plea to put your favorite at the top of your ballot even if you think it already has enough support; 4) another reminder that you won’t help your No. 1 choice by leaving the rest of the ballot blank, so please fill all the available slots; and 5) a request not to wait for the last minute to vote, because the polls will close precisely at 5 p.m. PST on Friday, January 12, “even if you’re in the middle of casting your vote.”

Careful readers of this space will know that the first four points are accurate, as we’ve explained before, and I have no reason to doubt that the fifth isn’t as well.

Only the accountants at PwC, who will no doubt be extra-super-duper conscientious this year, will know how many members fill in all the slots on their ballots and how many wait until the last minute to punch in their choices.

But the real question is who they’ll vote for, and who will end up with Academy Award nominations on the morning of January 23. And while this is unquestionably the most confusing, confounding Oscar season in recent memory, we do now have some clues as to who’s got the upper hand.

Also Read: Why Oscars Could Produce Only 7 Best Picture Nominees This Year

Forget about the critics’ awards or the Golden Globes, which have garnered most of the headlines so far. Instead, let’s turn to the Hollywood guilds, which are composed of film professionals, some of whom also happen to vote for the Oscars.

So far, three of the four major guilds have announced nominations: the Screen Actors Guild in December, the Writers Guild on Thursday and the Producers Guild on Friday. The fourth of the guilds, the Directors Guild, is waiting until January 11 to unveil its choices – but the first three can give some key hints about how industry voters are leaning.

And the American Cinema Editors have announced the nominations for the ACE Eddie Awards, which can serve as a fairly accurate predictor of the all-important Best Film Editing category at the Oscars. (“Birdman” notwithstanding, it really helps to have an editing nomination if you expect to win Best Picture.)

Also Read: How Many Votes Does It Take to Get an Oscar Nomination in 2018?

So who has the inside track, and whose awards hopes are dimming by the day?

Two films have swept the board so far with the SAG Awards’ all-important ensemble-cast nomination in addition to nods from the Producers Guild, Writers Guild and editors: Jordan Peele’s socially-conscious horror film “Get Out” and Greta Gerwig’s coming-of-age story “Lady Bird.”

Peele’s thriller hardly seemed to be a likely Best Picture contender when it opened back in February, and Gerwig’s felt like a little film that would be happy to land a couple of acting nods and a best-pic mention. But now they’re at the top of their class, with a significant chance to cobble together the kind of consensus appeal it takes to win.

(First, though, they have to have enough passionate support to get nominated – but that should be easy for both films.)

And maybe playwright and director Martin McDonagh’s “Three Billboards Outside Ebbing, Missouri” belongs in the top rank, too: It missed a Writers Guild nomination, but it wasn’t eligible because the WGA restricts its nominations to films that are signatories to its basic agreement, which “Three Billboards” was not. So you can’t hold its failure to be nominated against it.

You can hold it against “The Post,” though. Steven Spielberg’s journalism drama was nominated by the Producers Guild, the best Oscars predictor among the guilds that have announced so far, but it was bypassed by both SAG and the WGA. And while you could explain away the SAG snub by figuring it just didn’t screen early enough for all of the nominating committee to see it, the WGA had enough time and still didn’t go for a movie about writers.

That’s a bad sign – not necessarily an indicator that it won’t be nominated for Best Picture, but a real roadblock in its path to a win.

The guilds have also left troubling omens for Paul Thomas Anderson’s “Phantom Thread,” Joe Wright’s “Darkest Hour” and Sean Baker’s “The Florida Project,” all of which landed individual SAG nominations (but not the ensemble nod) but were shut out by the PGA and WGA.

But they’ve been good to “Molly’s Game,” “The Big Sick” and “I, Tonya,” which have done better than expected.

So as Oscars voting takes place over the next week, the landscape looks something like this:

Big movies, big expectations: “The Shape of Water,” “Dunkirk.” “Shape” has PGA, WGA, ACE and two individual SAG noms. “Dunkirk” has PGA and ACE, but without acting or writing noms it’ll have a tough time winning. A nomination seems assured, though.

Right behind: “Three Billboards Outside Ebbing, Missouri,” “Call Me by Your Name.” “Three Billboards” has been nominated for everything it’s eligible for; “Call Me” has PGA, WGA and two individual SAG noms (but not ensemble). Both have elements that could make them challenging for some voters, but both are primed to get into the Oscars’ top category.

Too much in the Oscars’ sweet spot to ignore: “The Post.” The guild results have been troubling, but the PGA nomination should be a sign that it’ll at least land a best-pic nom.

Don’t count them out: “The Big Sick,” “I, Tonya,” “Molly’s Game,” “Mudbound.” If the Oscar system only produces seven Best Picture nominees, they’ll likely be left out – but if it reaches eight or nine, they’ve all shown enough strength with the guilds to be in line for those final few slots.

Dreams never die: “The Disaster Artist,” “Wonder Woman,” “Logan,” “Blade Runner 2049.” The first is too slight, the middle two are superhero movies and apparently the last one is too long for a lot of people. Guild nods notwithstanding, they are big Oscars longshots in the top category, though they’ll certainly show up elsewhere on the ballot.