I am writing this story about my mother, to let everyone who still has a loved one in longterm care know what they may expect when the Motion Picture & Televsion Fund makes final evictions to clear the premise.

My Mother, Ana, was in the fund’s longterm care center in January when the evictions were first announced. My dad, Bill (a retired property master), is also a resident and in good health. He would spend many hours every day visiting her. 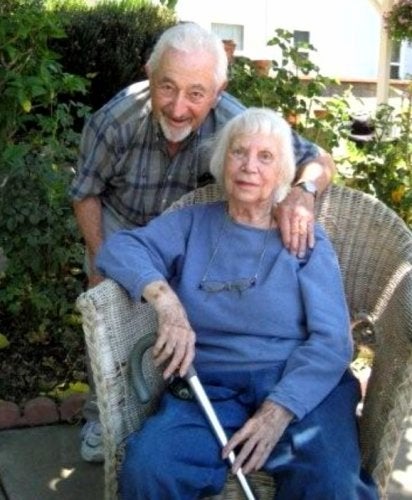 The fear he felt when he learned she would have to leave him was overwhelming. (Read also Steven Mikulan on the Kafka-esque Twilight at the MPTF.) He reacted by desperately encouraging her to eat, walk and take her medications (which was difficult with my stubborn mother).
Thanks to his efforts and the extraordinary care of the nursing staff in at the center, she recovered enough to move to the assisted-living lodge.
He was also promised by senior management of MPTF that she could return to longterm care if her condition changed as long as it was still open.
About three weeks ago she fell in the middle of the night and cracked a couple of ribs.
She received care in the MPTF hospital, but the medical staff would not allow her to remain more than a few days. I tried to convince them to let her recuperate in longterm care so she could remain with my dad.
I was told by the staff physician and the nursing administrators that longterm has been closed to any new admittance and they no longer had a therapist on staff for physical therapy (standing and walking in my mother’s case).
She was moved to a convalescent center many miles away, and my dad was given taxi credits for a couple of visits per week.
His hope was she would be home soon.
The separation, as feared, was too difficult for my mother. She became disoriented, delusional and combative with the staff at the convalescent center. The only times she would settle down and cooperate was during my dad’s visits.
A few days a week was not enough. After developing a medical problem, she became more combative, and the staff found her too difficult to control. Their solution was to move her again to a psychiatric unit at a local hospital.
Her MPTF medical case worker told me that often older people become disoriented and have difficulty adjusting when moved. If trained medical staff know this is a likely result, then why do they do it? I again asked if they could move her back to longterm care, but she repeated the management mantra that they could not admit anyone.
There appeared hope that my mother would recover under psychiatric care but this has been a medical roller-coaster. Some visits she is lucid and engaging and others she is sedated and showing psychotic symptoms.
It is questionable if she will improve and, if she does, could she survive a return to the convalescent center?
My mother’s condition is desperate. What started with cracked ribs has turned into a life struggle in a couple of weeks. Her husband and her family are angry and frustrated about the lack of humanity demonstrated by the Motion Picture Home in preventing her from entering longterm care.
There is no question in my mind that their decision to prevent her from recuperating in the longterm care unit has contributed to, if not been directly responsible for, her declining condition.
My parents were told longterm care would be there for them when they moved into the facilities 10 years ago. How can this promise be broken in only one year?
It seems management has again taken advantage of an 89-year old-man in making a verbal promise they knew they would not keep.
BIO Scott Wainess
Scott Wainess has worked in the manufacturing industry for 30 years, in technical and management positions. He holds undergraduate and graduate degrees from California State University, Northridge, and lives in Santa Clarita. He is married with one son, and one grandson.

Scott Wainess has worked in the manufacturing industry for 30 years, in technical and management positions. He holds undergraduate and graduate degrees from California State University, Northridge, and lives in Santa Clarita. He is married with one son, and one grandson.
x
Looks like you're enjoying reading