The administrators of the Motion Picture Home in Woodland Hills must believe that silence is golden.

Why else would they keep the retirement facility’s remaining residents in the dark about a final moving day deadline? There were 78 of them left back in August, when MPTF CEO Dr. David Tillman sent them a letter stating the necessity for them to leave by year’s end, but no one has actually give an official close-date for the longterm care center. 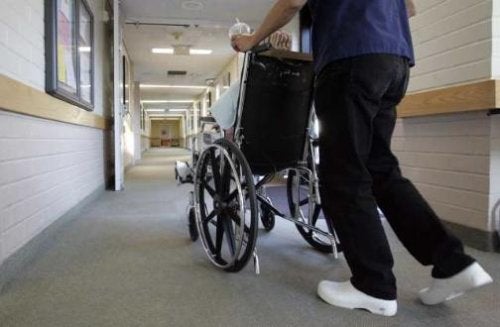 Well, perhaps they want to save paper. Or maybe they prefer to spare the seniors the pain of receiving legal eviction notices for as long as possible.

There are other medical facilities on MPTF’s sprawling Mulholland Drive campus, but people describe the place to me as a somewhat haunted place since nearly 300 employees — about one-third of its unionized health-care work force — are in the process of being sacked.

The stated point of closing down the home and its companion acute-care hospital, of course, is to save money – back in January the MPTF claimed it had been bleeding $10 million a year since 2005. In the months that followed, those and other poverty claims have been exposed by TheWrap as accounting fantasies, while family members of the home’s residents blame the hospital’s own gross mismanagement for its money problems.

These discontents formed Saving the Lives of Our Own, a group fighting to keep the home and hospital open.

No one more embodies the facility’s mismanagement, these activists say, than MPTF CEO Dr. David Tillman, who pulled down a cool $600,000-plus in wages and expense allowances in 2007, proving that you really can make a profit at a nonprofit. By comparison, according to tax records, Tillman’s successor at St. Mary Medical Center in Long Beach, where Tillman served as CEO before taking over the Motion Picture Home in 2000, earned a more modest $216,000 in 2007.

The news of the home’s closure has shocked an entertainment community that liked to believe in the existence of both safety nets and a culture of compassion. Still, Hollywood has gathered its compassion and belief in safety nets – and done nothing.

No fundraisers in private homes, no benefits at the Bowl, no A-lister stepping forward with a giant donation. Most people, it seems, have bought the line that without this harsh but essential amputation, the rest of MPTF’s charity work, and the operation of its more financially stable medical facilities, will collapse.

This indifference has hit a raw nerve, proving to many that there are two Hollywoods — one, a red-carpet land of well-paid professionals; the other, a forbidding landscape on which people live from paycheck to paycheck.

This is all a bit puzzling when you consider the MPTF’s initial announcement in January came off, to put it mildly, a little wanting on the humanity end.

Since then, chastened fund spokespeople have softened their money talk while sharpening their talking points. Meanwhile, Saving the Lives of Our Own has waged a shaming campaign against MPTF, with activists picketing fund events and accusing the home of intimidating family members.

One man whose mother is a Motion Picture Home resident told me he’d been pointedly asked by high-level administration staff member, “What if the others leave, or enough of them, and she is no longer safe where she is?” (Requests for comments by MPTF on this and other questions had not been answered by the time of publication.)

Both sides are currently girding for possible legal action and either confine their comments to prepared statements or refer reporters to lawyers. And so, for now during this cold war, Motion Picture Home residents live in a Kafka-esque twilight in which they are neither welcome nor banished from the home.

For them, the cruel irony is that they are supported by a Hollywood in which no one wishes to be a bad guy, but where no one is willing to be a hero.