Professional golfer Michelle Wie West read Rudy Giuliani the riot act Friday night for his blatantly sexist comments made during a podcast where he shared a story about being able to see her underwear.

Giuliani went on Steve Bannon’s “War Room” podcast on Thursday to share stories about conservative radio host Rush Limbaugh, who died earlier this week from cancer. The former New York City mayor recalled a story that involved a round of golf between Limbaugh and Wie, which, despite her accomplishments as one of the sports’ most visible female players, had nothing to do with the sport.

“On the green is Michele Wie, and she is getting ready to putt,” Giuliani said during the discussion. “Now Michelle Wie is gorgeous. She’s 6 feet. And she has a strange putting stance. She bends all the way over. And her panties show. And the press was going crazy.”

“It’s unsettling to hear of this highly inappropriate story shared on a podcast by a public figure referencing my ‘panties’ whilst playing in a charity pro-am. What this person should have remembered from that day was the fact that I shot 64 and beat every male golfer in the field,” Wie said without naming Giuliani by name in a message posted on her Twitter account Friday night. “My putting stance six years ago designed to improve my putting stats (I ended up winning the US Open that year), NOT as an invitation to look up my skirt!”

Wie, incidentally, was the youngest player to qualify for a USGA amateur championship at 10 and won the U.S. Women’s Open in 2014. On the flip side, in October 2020, Giuliani was caught with his “hand down his pants” after agreeing to be interviewed in a hotel room by a young female “journalist,” who turned out to be actress Maria Bakalova in a segment for “Borat Subsequent Moviefilm.” Giuliani later said his action was misinterpreted and was, in reality, “tucking in my shirt.”

You can read Wie’s full statement below or by clicking here: 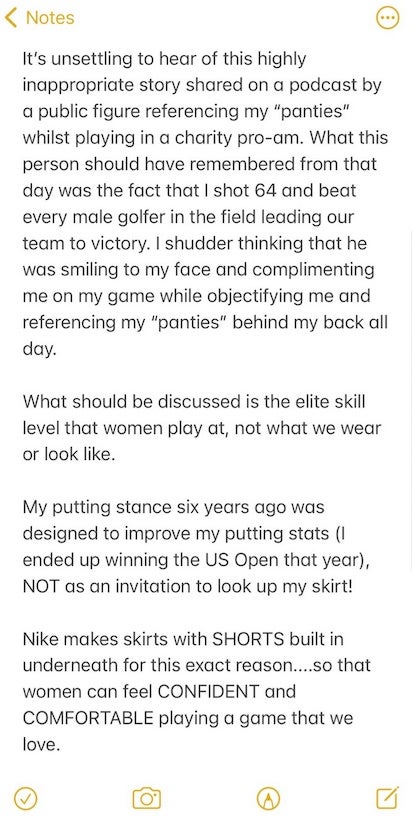