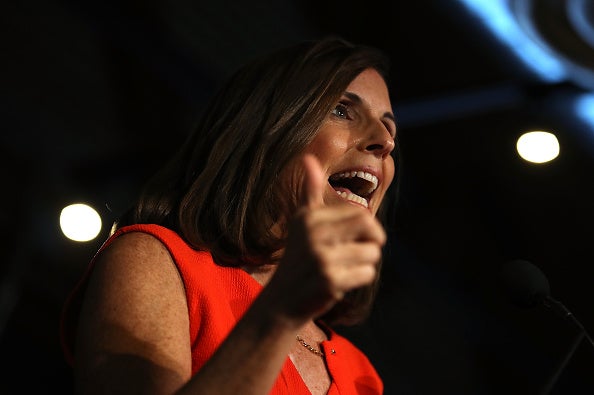 Sen. Martha McSally called a CNN reporter a “liberal hack” and refused to answer his questions on Thursday, which took place in the halls of Congress. She went on Twitter later in the day to confirm and share the exchange.

“You are,” McSally wrote in response to CNN’s Manu Raju about the moment she called him a “liberal hack.” She later included a video of the encounter. Raju, the network’s senior congressional correspondent, followed up a half-hour later with the CNN video of the incident.

“Sen. Martha McSally, a Republican facing a difficult election race, lashed out when I asked if she would consider new evidence as part of the Senate trial. ‘You’re a liberal hack – I’m not talking to you. You’re a liberal hack.’ She then walked into a hearing room,” CNN’s Manu Raju tweeted initially on Thursday.

Her refusal to answer a question about the impeachment comes as the Senate prepares to begin its impeachment proceedings. Congress impeached President Donald Trump in December and sent articles of impeachment to the Senate on Wednesday. Lev Parnas, an associate of Rudy Giuliani accused of being involved in the attempt to pressure the Ukrainian government to investigate former Vice President Joe Biden’s son in order to boost Trump’s re-election efforts, told Rachel Maddow on Wednesday that Trump “knew exactly what was going on.” He also said more documents related to the accusations against Trump will be released.

A representative for CNN did not immediately respond to a request for comment on McSally’s characterization of the reporter.

Politico’s Jake Sherman commented on the interaction, calling it a “strange answer to a great reporter asking a question that literally every senator” was being asked Thursday.

Sherman also pointed out that McSally’s predecessor — the late Sen. John McCain — had a funny relationship with Raju. He pranked him in the halls of Congress a few years ago while Raju did a live report, sneaking up behind him to make a silly hand gesture as he spoke.