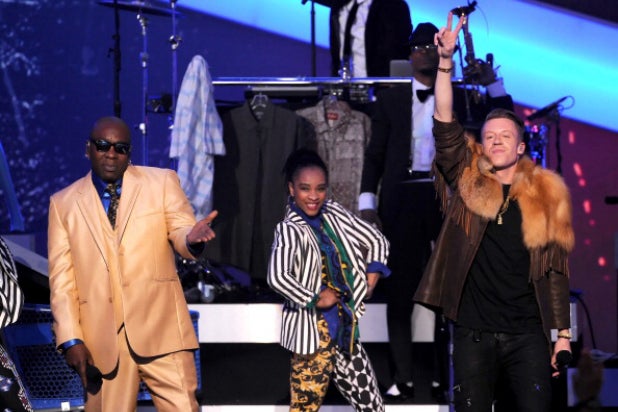 The nominations for the 56th Annual Grammy Awards were announced Friday night in an hour-long CBS special hosted by LL Cool J.

Just six categories were announced during the 60-minute concert/reveal, but the full list was disclosed shortly thereafter. Here are the nominees:

Song of the Year
“Just Give me A Reason” by P!nk
“Locked Out of Heaven” by Bruno Mars
“Roar” by Katy Perry
“Royals” by Lorde
“Same Love” by Macklemore and Ryan Lewis feat. Mary Lambert

Best Pop Group/Duo Performance
“Get Lucky” by Daft Punk and Pharrell
“Just Give Me a Reason” by P!nk and Nate Ruess
“Stay” by Rihanna feat. Mickey Echo
“Blurred Lines” feat. T.I. and Pharrell
“Suit and Tie” by Justin Timberlake and Jay Z

Also read: The Beatles Get Grammys Special on CBS

Best R&B Performance
“Love And War” by Tamar Braxton
“Best Of Me” by Anthony Hamilton
“Nakamarra” by Hiatus Kaiyote featuring Q-Tip
“How Many Drinks?” by Miguel featuring Kendrick Lamar
“Something” by Snarky Puppy With Lalah Hathaway

Best Rap Album
“Nothing Was The Same” by Drake
“Magna Carta…Holy Grail” by Jay Z
“Good Kid, M.A.A.D City” by Kendrick Lamar
“The Heist” by Macklemore and Ryan Lewis
“Yeezus” by Kanye West