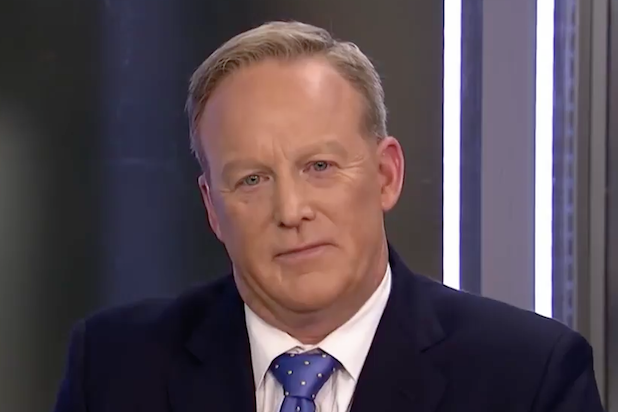 Add “Grey’s Anatomy” showrunner Krista Vernoff to the list of people opposed to the casting of former Trump press secretary Sean Spicer on the next season of ABC’s “Dancing With the Stars.”

In a message posted on Twitter Thursday night, Vernoff urged the show, ABC and Disney CEO Robert Iger to cut Spicer from the show’s lineup. “I deeply abhor this decision by the company I work for and truly love,” she wrote. “This man lied daily, to our faces, and made a mockery of our country. This is not cause for celebration or celebrity. It’s not too late to change this plan. Please @DancingABC @abc @RobertIger.”

Representatives for ABC, “Dancing With the Stars” and Disney did not immediately respond to a request for comment from TheWrap.

Also Read: Sean Spicer Downplays 'Dancing With the Stars' Blowback: 'I Look Forward to Having Some Fun'

Vernoff joins a growing number of celebrity critics of the hiring, a list that even includes the show’s host, Tom Bergeron. On Wednesday he said he opposed the decision because he wants the show to be “a joyful respite from our exhausting political climate and free of inevitably divisive bookings from ANY party affiliations.”

Bergeron added that he and the show’s producers “can agree to disagree, as we do now, but ultimately it’s their call. I’ll leave it to them to answer any further questions about those decisions.”‘

As the first White House press secretary for President Donald Trump, Spicer was often accused of making false or misleading statements on behalf of the president. He resigned in July 2017 after six months on the job.

Also Read: Twitter Looks At Movies From a Trump Angle with #SpicerSpinsMoviePlots (Photos)

“Dancing With the Stars” Season 28 is set to debut on Monday, Sept. 16 on ABC at 8/7c. Bergeron and Erin Andrews are set to return as hosts, along with judges Len Goodman, Bruno Tonioli and Carrie Ann Inaba.

I deeply abhor this decision by the company I work for and truly love.

This man lied daily, to our faces, and made a mockery of our country. This is not cause for celebration or celebrity.

It’s not too late to change this plan. Please @DancingABC @abc @RobertIger https://t.co/OAlvpgSpJg