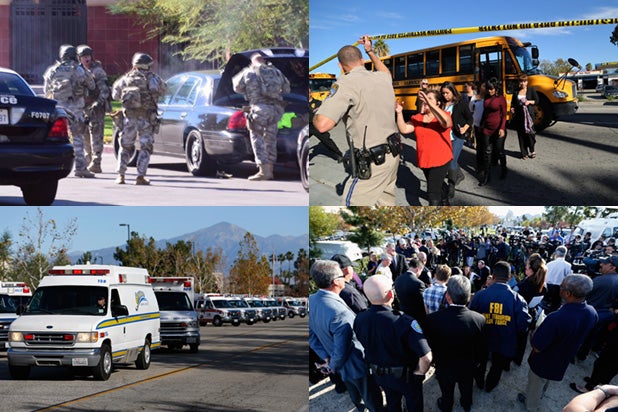 A couple secretly hoarding a cache of guns and plotting their nefarious political goals as they go about leading a “normal” American life while nurturing their offspring. This storyline is most familiar to those of us who are fans of FX’s “The Americans,” the story of Soviet spies posing as a model American couple with kids while violently taking out enemies of Mother Russia. Both scenarios include a garage full of weapons, and a couple clandestinely plotting evil acts. While the hit television show returns for its fourth season in 2016, the real life couple’s double lives came to a brutal end thanks to rapid police response.

It’s doubtful that the San Bernardino couple took cues from watching “The Americans” on how to successfully lead their double lives, or from “Bonnie and Clyde” on how to go on a terrorizing shooting spree. ISIS was probably their evil inspiration.

But the probable lack of celluloid influence on this terrorist couple should not let Hollywood off the hook. Enough with so much violence on the screen. It’s about time that the creative forces in film, television and video games should worry that their products contain so much gratuitous violence that is having a negative effect on the American psyche, especially inside the minds of young impressionable citizens.

Week after week, Americans are watching the same horrible replay of news — shooters killing innocent people. In response to what has become a new reality show we obsessively tune into cable TV news reports so we can find out how many died and who committed these heinous killings. Mesmerized, we watch until it is too painful to hear the speculations of who the shooters are or other gory details.

Then we turn the channel to another station or go off to the movies to be entertained. For some of us the fear of gun violence is making us afraid to go places, even escaping to the movie theaters. I know this fear all too well as a niece of mine told me that she is keeping away from movie theatres after the shootings in Lawrence, Louisiana.

We desperately run to the movies to escape the news, but more often than not the most popular choices share some of the same traits as the real-life non-stop violence. Just look at the blockbusters currently in the theaters — shoot ‘em up tales about James Bond in “Spectre” or the third installment of “Hunger Games.”  Didn’t James Bond used to be about a debonair man who used his charm and clever devices to conquer the enemies of Britain? But this latest version of the franchise shows uncharming shootouts and sadistic enemy behavior. I remember being horrified while attending a screening of the first “Hunger Games,” as an audience made up of young kids cheered their peers on the screen hunting down other young people to kill.

We might spare the blood and wisely choose to see “Brooklyn,” the positive immigration Irish love story, “Trumbo,” the bio pic of the talented and blacklisted screenwriter Dalton Trumbo, or “Spotlight,” which shows how investigative journalists revealed sexual abuse by priests and a massive cover-up.

But even during the trailers we are exposed  to violent films that are hyped up for the holiday season.  There are scenes of battles in outer space in “Star Wars” or bad guys and a gal shooting it out in the Wild West. Among the top features for the holiday season is “The Hateful Eight,” billed as a bullet-flying cowboy movie by Quentin Tarantino, who made violence cool starting in “Pulp Fiction.” It is noteworthy that previews for “Hamlet” seem more gory than Shakespeare would ever intend.

What lessons of life are we teaching our children? That it’s cool to kill or thrilling to watch it? Or they can single-handedly orchestrate numerous deaths in the video games they are begging us to buy for the holidays? These games, played alone and without time limits, can lead to isolationist and maybe even violent tendencies. Should we not be afraid that our children are being exposed to the glorification of the shoot-‘em-up mentality with no parallel in history?

Clearly guns are big business in America, as evidenced by the enormous sales on this past Black Friday. Obviously if millions buy guns, then millions will want to buy tickets to movies that glorify violence.

But don’t the studios realize we are brainwashing our children to think that killing is normal and guns are cool? The makers of our popular culture need to do some serious introspection. People in show business are also mothers and fathers and family members who desire to keep their loved ones safe and growing up with positive values. We need to call on the screenwriters and the producers to reevaluate what plot themes are being produced. Do they celebrate and glorify killings and executions?

Instead of showing kids attacking one another in “Hunger Games,” how about showing them teaming up to discover new cures for horrible diseases or ways to lessen global warming? Substitute the themes of battling spaceships in “Star Wars” with having them instead explore new pathways in space.

Also, instead of destroying homes in a major scene, write a plot showing how citizens can build housing for the homeless, welcome fellow Muslim neighbors against discrimination, or having a community effort erect new schools in the inner city. Kudos to Spike Lee for writing a script for “Chi-Raq” that depicts women challenging the abundance of and misuse of guns.

We don’t need senseless killings to chalk up a blockbuster. Remember how the very successful “ET” by Steven Spielberg showed the wonderful bonding of a young child with a visitor from other space. Give me that touching of fingertips over battling guns in space any day of the week. And if you look at the Golden Globe nominations the more humane storylines are the ones being nominated. You can win awards depicting non-violent scenarios.

While feminists demand fair equity in payment for actresses and more work for female directors, maybe they can also call for more humane topics.  The plea would seem quite appropriate, as one could hope that with more females having control over celluloid themes more compassionate subjects and less testosterone-driven violence will be made. “Pitch Perfect” and other “chick flicks” are showing Hollywood that very successful films can be made about and for women without any shots being fired.

It’s not enough for the Hollywood community to just advocate for positive and bloodless scripts. We need to implore our movie stars to take action. Why is it that only those relatives so tragically affected by the violence are stepping up to the cause of gun reform? We need the attention and press that movie stars attract, just like when they are helping other good causes around the globe. Help us fight the war against terrorism by starting at home where weapons are too readily available.

They should join the likes of Amy Schumer and Jennifer Hudson to talk about gun violence. What if mega stars like Daniel Craig and Jennifer Lawrence, who star in the current bloody blockbusters, and the lead actors in “The Hateful Eight,” were to call for gun reform? What if George Lucas, who created all those galactic wars and is very generous in his personal giving, would call for and contribute toward lobbying for gun reform?

The stars support politicians who run for office, so perhaps it is time they follow their good examples. Let Michael Bloomberg‘s support for gun reform or the New York public advocate PJ James’s call for a bank to terminate financing the makers of the guns used in San Bernardino be your role models. The New York Times’ front-page editorial calling for gun reform is another shinning example.

Whoever wins at the upcoming awards ceremonies and at press conferences about your newly released films, please step up to the podium and call for gun reform. You can help cure the American disease that is infecting the minds of children and adults.

How about a “gun reform aid” concert? Bono, please come to Washington after Paris to play at a rally calling for gun reform. Rock the grounds near the Capitol where cowardly Congressional members are intransigent.

We have two great examples of a conscientious cultural leaders here in Washington D.C. After the children were killed in the Sandy Hook elementary school, the artistic director of Arena Stage, Molly Smith, was motivated to organize a march on Washington to protest the use of guns. Ari Roth’s newly launched Mosaic Theatre is staging Marcus Gardley’s The Gospel of Lovingkindness, a play depicting the timely topic how gun violence in Chicago is killing our Black youth.

We need more theatre professionals to join in declaring moral outrage about the status quo of guns in this country. Mosaic Theatre’s next production of Marcus Gardley’s The Gospel of Lovingkindness depicts the timely topic of gun violence in Chicago that is killing our Black youth.

Broadway please join in the debate. We need New York theatre professionals to join in declaring moral outrage about the status quo of guns in our country.

While President Obama and Homeland Secretary Jeh Johnson weed out those acting out ISIS’ nilhist and destructive goals on our shores, the cowardly Congressional members opposing gun reform must discard their tiresome lines.

Enough with the overused our thoughts and prayers go out for the victims. How can they mouth this same old song, while the majority of Americans desire gun reform. We need to pressure unfeeling Congressional members who kowtow to the NRA. Don’t blame the vast majority of peaceful Muslims; direct your attention to the gun lobby.

Hollywood, please wake up and help lead us by creating blockbusters that promote good will and curtail violence. Inspire Americans not to stockpile more guns but live more peacefully with each other. Hopefully the conveyors of popular culture will stop teaching our children to cheer on game violence by creating more humane plotlines. And don’t leave the lobbying only to the bereaved family members. Bring your star power here to Washington, to walk the halls of the nation’s capital to help lobby stubborn lawmakers to change their archaic views on gun possession.

We need you to star in a new narrative — helping Americans to be the leaders of the free world, proud of their society having fewer guns and less violence.

Filmmaker and writer Aviva Kempner just released “Rosenwald,” with dedications to tighter gun controls and the martyrs of the Emanuel AME church, and is writing “Middle Age Madness,” a book that questions why there is so much violence in American culture.