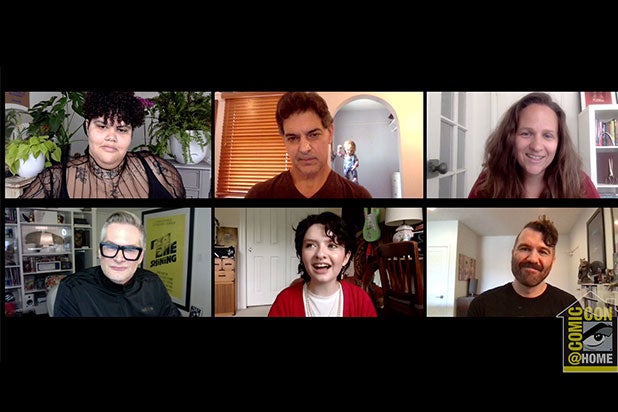 To celebrate Shudder’s upcoming release of a documentary about LGBTQ horror film history, actors and creators of the genre got together during Comic-Con@Home to discuss why horror is queer and when they first fell in love with the genre.

Crucchiola started the panel with some foundation language: What defines queer horror? Wineman explained that he breaks it down into four key components: 1) explicit representation 2) queer coding, which is the implication that the character is queer, 3) whether queer folk see themselves in horror and 4) just having a queer creator.

Also Read: What 'Hannibal' and 'The Silence of the Lambs' Fans Want For CBS Pilot 'Clarice' | PRO Insight

“If an alien is queer to me, then it is queer, because I see myself in that, he explained.

“If queer or trans folks see themselves in something, then it’s ours, period,” Bever said. “Any community who is marginalized and experiences the death rates and death threats that we do, we are 100% allowed to find ourselves wherever we can. If anyone has a problem with that, that tells us something about them… Horror is just a playground for the imagination and queer folks are so used to see things outside the little box they are given or outside these made up set of rules to behave by, it’s just such a wonderful combination.”

Both Mancini and Fuller didn’t create their projects with queer characters in mind. Mancini said that in the first three Chucky movies, there was nothing “explicitly queer there” but in retrospect, the movies “were informed by my queer character” and his “conflicted relationship with my father.”

“In ‘Bride of Chucky’ that’s where I was consciously trying to gay it up,” he said. “I had an explicitly gay character, I cast Patricia Arquette and John Ritter, various people who had connections to gay culture and from then on we’ve gotten gayer and gayer. Since ‘Bride,’ it was a conscious thing to make my franchise a specifically gay thing.”

Fuller said he didn’t want to tell “a queer story” but rather “wanted to tell a story of how straight men fall in love with each other.’

“Fannibals were projecting a queerness on the characters and their relationship that I wasn’t consciously tapping into,” he explained. “Then it became queer not solely out of listening to the Fannibal community but reading into the authenticity of the relationship between these two men and realizing that there was a love relationship.”

Crucchiola then asked her panel participants why they fell in love with the genre, and everyone shared their own personal story. Wineman explained that “Chucky was my entry point,” because he was too young to watch the film so he had a neighbor tell it to him “like a fairytale.”

“I was bad at fitting in, but I was king of the sleepover because I had conquered Chucky,’ he said. “It gave me a feeling of toughness. As an adult looking back, what I was drawn to was the strength and the characters being survivors. I am a survivor, a lot of queer people relate to that because queer people are survivors.”

Watson, who said they’ve always been placed in a specific box of only being allowed to play “the queer token character,” said they first started thinking about their queer identity when they watched film noir movies like the old “Dracula” and old “Godzilla” with their mother.

“It represented so much more to me at the time,” they said. “I did a lot more thinking about how it may have affected my queer identity watching all these queer-coded villains from so far back that was before my time and thinking how it was back then, how can I be in this industry and a queer person in this world and avoid that?”

Bever said the first horror movie she watched was “Halloween,” and her heart was racing because she wasn’t allowed to watch films like it but it was her way to “disobey” rules set on her as a child.

“It was so important for me to disobey rules as a child because I, growing up in church it was all about rules and the rules are directly from God and not made up by your peers, and I was taught once Jesus comes back everyone can see your life on a screen and everyone is going to know every single thing you did,” she said. “I was always looking for safe ways to rebel, and watching things I wasn’t supposed to watch was safe. I didn’t feel safe to come out as queer person until I was 25. That’s what I went through trying to figure out my own sexuality. I have been told I was wrong, that if I feel these things, I would go to hell for it. It was hard to this day to see where this feeling of shame is coming from — it’s from a rule I don’t believe in anymore… I changed the narrative about myself. I think horror did that for me.”

Mancini said his passion for horror began with “Dark Shadows” and was further amplified by watching “The Omen” and “Carrie.” “All these things have in common that these are characters, kids, who feel powerless but they are enable to enact supernatural revenge on their enemies and that’s what appealed to me,” he said.

Lastly, Fuller said that the danger characters feel in horror films resonated with what he was experiencing at home as a child.

“I grew up in a very violent home, with a very physically and verbally abusive father, so there was something interesting in seeing horror movies and seeing people in danger, because I felt a level of threat just being in a house with a violent, ignorant, racist man, there was something about the acknowledgement of being in danger that felt genuine or authentic, so I felt I understood the circumstances that the characters were in,” he said. “There was something almost implicit in the dynamics of the stakes being so high, it was interesting to have a narrative that spoke to the danger I felt daily and to see people survive that danger.”