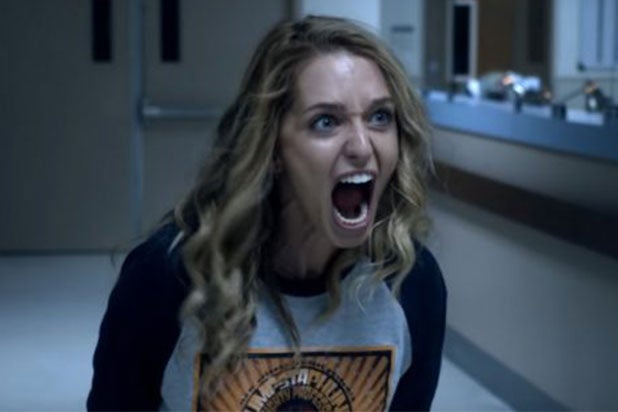 Jessica Rothe died 11 times in the first “Happy Death Day” film, and although she “only” died eight times in the sequel, she can finally add skydiving into the mix.

“I think this time I’m pretty sure it was only eight times [that I died],” Rothe told TheWrap. “That being said, Chris and I haven’t actually talked about this but my understanding is that Tree dies many more times than we see on screen. In the first film, she only died as many times as we saw. Because of her new mission and what she has to do, I decided for myself that this has been going on for a while.”

Rothe’s favorite, yet most challenging death scene was skydiving, where she jumped out of a plane wearing only a pink bikini.

“That was broken into two parts — the first part was just me doing a trust fall out of the airplane onto some mats. It was really fun and silly,” she explained. “The second part — where I’m falling through the frame in slow motion — they built like a dunk tank platform and they pull me up seven or eight feet above the ground with pads below, and they’d count to three, and then I would just drop out from underneath. It happened so quickly that in order to get the facial expression and the physical pose, I would just have to tense my body as much as humanly possible because I just never knew when they were going to drop me. And it was surprisingly hard because I was in a swimsuit they couldn’t put me in a harness and I was falling in real time, and trying to look super cool and casual which was kind of a mindf—.”

In “Happy Death Day 2U,” Tree is once again stuck in a time loop on her birthday, where she wakes up to find a killer in a baby mask on a mission to kill her. But this time, the killer is also after her friends, and Tree must die over and over again to get them out of this mess and to discover who the killer is.

“The sequel starts where the first film left off,” Rothe said. “She is empowered, she has learned all these lessons and she’s ready to take them into the world. Even though the tables have turned and she thinks she’s escaped the situation, she’s going to handle things differently… And to have her continue fighting back was important to me as we developed the second film. There is more of an emotional arc in the second movie — that’s a part of Tree that we knew was there but we didn’t get to explore it as much in the first film. That’s what excited me about returning to the character — the chance of peeling back the layers even more and really seeing that more intimate, vulnerable side of Tree.”

There has been talk about a third “Happy Death Day” film given the critical and commercial success of the first and the inevitable triumph of the second. The first “Happy Death Day” scored a 71 percent on Rotten Tomatoes and earned a whopping $125 million globally — although it was made for just $4.5 million. The follow-up was produced for around double the budget.

The second film’s title was a pun, and Rothe has an idea for the third movie’s title, assuming there is one.

“Someone tweeted ‘Happy Death Day Tree,’ and I want to find that person and pay them whatever rights we need to to use it,” she said. “That’s the best one I’ve heard so far.”

And Rothe has died many, many times, in many, many different ways. But her preferred way to go would be “dumped in chocolate cake” or skydiving: “The sensation of falling was kind of fun.”