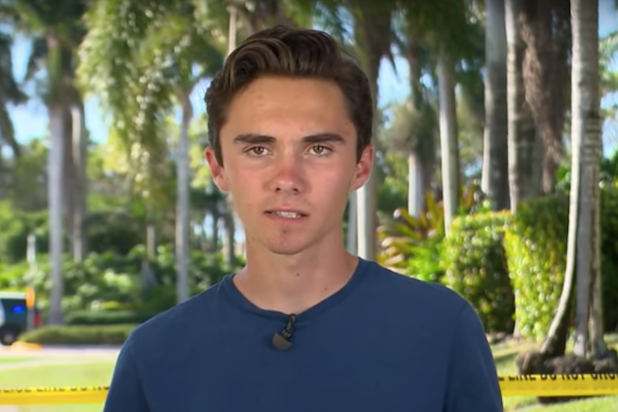 Parkland shooting survivor and student activist David Hogg called on people to boycott the advertisers for Laura Ingraham’s Fox News show after Ingraham said in a tweet that he “whines about” his college rejections.

Ingraham has since apologized to Hogg via Twitter, but not before several companies were convinced to pull their ads from the show.

So far, more than two dozen companies that Hogg called out on Twitter have agreed to pull their ads and Hogg has proceeded thanked some of them on Twitter.

“We believe strongly in the values of our company, especially the one that says, ‘We are better together,'” the travel and restaurant website TripAdvisor told TheWrap in a statement. Here is their full statement:

“We believe strongly in the values of our company, especially the one that says, ‘We are better together.’ We also believe Americans can disagree while still being agreeable, and that the free exchange of ideas within a community, in a peaceful manner, is the cornerstone of our democracy. We do not, however, condone the inappropriate comments made by this broadcaster. In our view, these statements focused on a high school student, cross the line of decency. As such, we have made a decision to stop advertising on that program. It is important to note that TripAdvisor has a global and diverse customer base, and is an active advertiser on a number of networks including news. Our media buys target a variety of time slots and audiences. That said, we will continue to monitor where our advertisements appear in the open market to ensure they fit our guidelines.”

“As a company, we support open dialogue and debate on issues. However, the decision of an adult to personally criticize a high school student who has lost his classmates in an unspeakable tragedy is not consistent with our values. We do not plan to continue advertising on this particular program,” the e-commerce home goods company said in a Thursday statement.

In a statement on Twitter, Rachael Ray’s food company Nutrish announced that it too was “in the process of removing ads from Laura Ingraham’s program.”

Hello, we are in the process of removing our ads from Laura Ingraham’s program.

“We have no plans to buy ads on the show in the future,” a Nestle spokesperson said in a statement to TheWrap on Thursday.

A spokesperson for Expedia did not issue a comment but did confirm the brand would no longer advertise with the Fox News program.

“We’d like to confirm that we are no longer advertising on Laura Ingraham’s show and are monitoring all of our ad placements carefully,” the streaming service said.

We’d like to confirm that we are no longer advertising on Laura Ingraham’s show and are monitoring all of our ad placements carefully.

“We appreciate our clients’ feedback on this, and we can confirm we’re no longer advertising on Laura’s show.”

Hey there! We appreciate our clients' feedback on this, and we can confirm we're no longer advertising on Laura's show.

Johnson & Johnson provided a statement to HuffPost saying they “will pull advertising from Ms. Ingraham’s show.”

“We will no longer advertise with The Laura Ingram (sic) Show moving forward,” the company told TheWrap.

“As of this morning, we have removed “The Ingraham Angle” from our TV advertising plan. It may take a few days for this change to take effect,” Miracle-Ear tweeted on March 30.

As of this morning, we have removed The Ingraham Angle from our TV advertising plan. It may take a few days for this change to take effect.

On Friday, Liberty Mutual CEO David Long sent an email to his staff telling them: “As many of you know, there have been several media reports regarding TV host Laura Ingraham’s comments regarding one of the students from Parkland, FL, and Liberty Mutual Insurance’s advertising during her program. These comments are inconsistent with our values as a company, especially when it comes to treating others with dignity and respect. We are not scheduled to run any future ads on her show and will continue to analyze our advertising placements to make sure they align with our beliefs as a company. “

“We have decided to take steps to discontinue advertising on this show,” the company told HuffPost.

“We have no further airings of our ad scheduled on Laura Ingraham’s program.”

Hi Mark. We have no further airings of our ad scheduled on Laura Ingraham’s program.

Byron Allen’s Entertainment Studios has run many ads for its upcoming movie about the late Ted Kennedy, “Chappaquiddick,” but announced that they would stop even though the movie does not open until April 6.

Hi Franics, we have pulled all Chappaquiddick ads from Laura Ingraham's show!

Principal investment group told TheHill on Friday that it was also removing its ads from “The Ingraham Angle.”

“Atlantis does not support or agree with the recent comments made by television broadcaster Laura Ingraham,” a spokesperson for the Bahamas-based resort told TheHill on Friday. “We have decided to remove all brand advertising tied to the program.”

Honda said it does not have any plans to advertise on “The Ingraham Angle,” according to Daily Beast reporter Max Tani.

Another update here: Honda tells me it does not have any plans to advertise on Ingraham's show (the company was listed by Media Matters as a recent advertiser)https://t.co/IXjROa2fS4

Claritin manufacturer Bayer said on Saturday that it plans to stop advertising and has no plans of advertising on Ingraham’s show in the future.

Yes, @JonCoopertweets, that’s right. @BayerUS has stopped advertising on Laura Ingraham and we have no plans to resume any time in the future.

TheWrap obtained an internal memo on March 31 to its employees that Allstate had severed ties with Ingraham’s show on March 28, the day Ingraham posted her tweet accusing Hogg of “whining.”

“Laura Ingraham’s comments about David Hogg were inconsistent with our values,” the memo read. “Allstate believes in youth empowerment and last year helped 5 million youth find their voices and take action to make the world better. We have not advertised on ‘The Ingraham Angle’ since Wednesday. We hope our youth can help us find a path to a less divisive future.”

A spokeswoman for the company would not confirm the memo’s authenticity, only saying: “We’ve taken note of your concern.” When asked if the company had any future ads scheduled to appear on the show, the spokeswoman said: “I cannot answer that question.”

Slimfast tweeted on April 10 that it has stopped advertising on Ingraham’s show and “have no plans to resume in the near future.” See the company’s tweet below.

We have stopped advertising on the Laura Ingraham show and have no plans to resume in the near future. We are also monitoring all ad placements carefully.

Meal kit delivery service Blue Apron dropped its sponsorship of Laura Ingraham’s show on April 10, claiming one of their ads aired on “The Ingraham Angle” without its knowledge.

“We were unaware that our ad would be running on The Laura Ingraham Angle last night,” the company told TheWrap in a statement. “We will no longer be advertising on the show, and will be working with our media buying partners to more closely monitor where our ads appear going forward.”

“IBM no longer advertises on the show you referenced,” the company confirmed to TheWrap after dropping “The Ingraham Angle” on March 30.

Listed as the number one company in David Hogg’s original boycott tweet, Sleep Number issued a statement obtained by the StarTribune on March 29 saying that, as is the case of other companies, their ads ended up on Ingraham’s program because of broader ad buys across cable networks and not a specific request to advertise on a given show.

“As we plan our ad buys, we don’t take a stance on content or views with programs we advertise on, which is common practice,” Sleep Number said in a statement. “With that said, we regularly review our advertising strategy to decide appropriate placement. At this time, this program is not part of our planned media schedule.”

“Mitsubishi Motors has removed its advertising on Laura Ingraham’s show and are monitoring all of our ad placements carefully,” the company told TheWrap on April 11.

“Red Lobster is no longer advertising during Laura Ingraham’s show,” the seafood restaurant chain told TheWrap in a statement.

BASF, a German chemical company, responded to a user tweet saying that it has adjusted its schedule so that ads will not appear during Ingraham’s show.

Hi, thank you for your message. Our advertising selection is based on channels rather than individual shows. However, we have adjusted this schedule so it will not include Ms. Ingraham’s show.

“We wanted to address concerns about our advertising. Ebates is a platform for all and we do not support polarizing statements of any kind. We placed our ads through a 3rd party and unfortunately this spot was placed incorrectly. We have since resolved the issue,” the company tweeted.

We wanted to address concerns about our advertising. Ebates is a platform for all and we do not support polarizing statements of any kind. We placed our ads through a 3rd party and unfortunately this spot was placed incorrectly. We have since resolved the issue.

After saying it had parted with the show, Ace Hardware resumed its sponsorship of “The Ingraham Angle,” airing two ads during the hour long April 12 broadcast.

A spokeswoman for the company apologized for having “incomplete information” when it announced it would cease advertising on “The Ingraham Angle.”

“Advertising on any network or show, is in no way an endorsement from Ace of the content contained or spoken within that program,” the company said in a statement provided to TheWrap explaining the reversal. “We appreciate the different points of view from our customers, and believe people should be treated with respect and civility.”

*The men’s clothing retailer Jos. A. Bank told TheWrap that it never bought ad time on “The Ingraham Angle,” and that ads, which ran on Ingraham’s show, were likely placed by the network. The company did not respond to multiple inquiries about whether or not Jos. A. Bank asked the network to not place its ad on “The Ingraham Angle” going forward. But according to a report by MediaMatters, Jos. A. Bank’s ads aired four times in the week leading up to the boycott and have not appeared since.