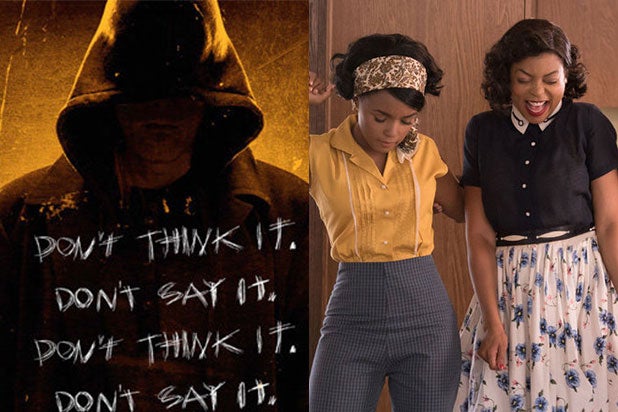 Fox’s “Hidden Figures” earned another strong $5.5 million on Friday, on track to earn $22.2 million over the four-day holiday weekend.

STX Entertainment’s “The Bye Bye Man” trailed closely behind, scaring up a solid $5.43 million at the Friday the 13th box office and is now over-performing the pre-weekend expectations.

The film is now on track to earn in the $13 million range ($15 million for the four-day weekend), although early estimates from STX had it at $10 million.

The film, co-financed by Los Angeles Media Fund, was directed by Stacy Title while Jonathan Penner adapted the script from the short story “The Bridge to Body Island” by Robert Damon Schneck. It was produced by Intrepid Pictures’ Trevor Macy, who created the idea of “The Bye Bye Man” after reading a horror anthology novel titled “The President’s Vampire.” Its CinemaScore is C while its Rotten Tomatoes score is at 27 percent.

Mark Wahlberg’s “Patriots Day” added $4.13 million to its box office total on Friday when it expanded to 3,120 locations from 7, bringing its cumulative up to $5 million. The movie about the Boston Marathon bombing is on track for a $15 million holiday weekend, although some analysts had projected the film to open in the $20 million range.

The movie, also starring John Goodman, J.K. Simmons, Kevin Bacon and Michelle Monaghan, has a CinemaScore of A and a Rotten Tomatoes score of 79 percent.

“La La Land,” the winner of a record seven Golden Globes, made another $4.1 million on Friday from 1,848 locations. The studio now anticipates $14 million for the three-day weekend and $17 million for the four-day weekend, bringing its domestic box office total to $76 million. Heading into the weekend, analysts had projected a close race between the film starring Ryan Gosling and Emma Stone, and “Hidden Figures,” “Rogue One” and “Patriots Day.”

Disney’s “Rogue One: A Star Wars Story” added another $3.2 million to its now $488.3 million domestic gross. Now in its fifth week at the box office, experts had estimated the “Star Wars” prequel to earn somewhere in the $20 million range due to the holiday weekend.

Ben Affleck’s “Live by Night” earned $1.95 million from 2,822 locations, bringing its domestic total to $2.1 million. The film is projected to make less than $10 million as it opens in 26 territories. Directed by Affleck, the film also stars Elle Fanning, Sienna Miller and Zoe Saldana and a 32 percent RT rating with a CinemaScore of B.

Paramount isn’t expected to have a good MLK weekend, with “Monster Trucks” grossing $2.6 million on Friday and looking to earn just $14 million over the four days ($10 million over three days) against a $125 million budget. In September, the studio’s parent company Viacom reported a $115-million write-down for a movie believed to be “Monster Trucks.” Heading into the weekend, the studio had anticipated a $8 million to $10 million opening weekend estimate.

The studio’s other film, Martin Scorsese’s “Silence,” is expanding nationwide this weekend to 747 theaters, grossing $660,000 on Friday. With the film’s budget being in the mid-$40 million range, the studio expects the movie to open to $1.9 million over the three-day weekend, and $2.2 million over the four-day weekend. Its cumulative through Monday is estimated at $3.3 million. It stars Andrew Garfield, Adam Driver and Liam Neeson and has a Rotten Tomatoes score of 83 percent.

Lastly, Open Road Films is releasing their new film “Sleepless,” starring Jamie Foxx, Michelle Monaghan and Gabrielle Union. With the budget around $30 million, the production company is expecting around $7 million to $8 million this weekend from 1,800 screens.