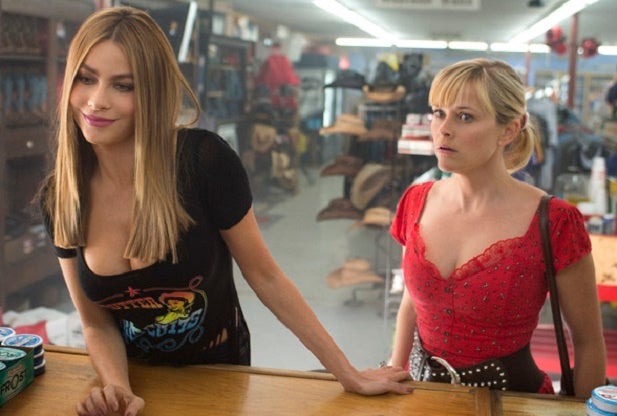 The Reese Witherspoon-Sofia Vergara comedy “Hot Pursuit” turned out to be just lukewarm in its box office debut this weekend, taking in just over $13 million in its debut.

The PG-13-rated cop caper is aimed squarely at women, and its backers Warner Bros.’ New Line and MGM, had hoped for more, particularly since it was Mothers Day weekend.

“Sunday’s a big day for us,” said Jeff Goldstein, executive vice-president of distribution at Warner Bros. “If we can get some of the moms out today,  we can make up some ground and hopefully set up some solid weekends to come.”

Bad reviews — it’s a bleak 6 percent positive on Rotten Tomatoes — appeared to have taken a toll on “Hot Pursuit,” directed by Anne Fletcher. And the “C ” CinemaScore from the 62 percent female audiences was weak too, so an improvement isn’t a given.

Depending on how the rest of the run, international and home entertainment go, the backers of the $35 million comedy stand to make or lose a relatively small amount of money. Neither Warner Bros. nor MGM is fretting over it, because the split rights deal leaves exposed in a big way.

With its production budget of at least $150 million and a proportional marketing spend, the stakes on “Mad Max” will be considerably higher than on “Hot Pursuit” for WB, both on the positive and negative side. And it offers a case study of the positives and negative of splitting rights.

Tom Hardy and Charlize Theron star in “Mad Max,” and that pairing, a bang-up trailer and pent-up anticipation for Miller’s followup has ignited plenty of buzz. But Universal’s very female-skewing “Pitch Perfect 2” opens Friday as well. Both films are tracking to debut at around $40 million, so a flop isn’t likely.

But what if “Mad Max” takes off, does $60 million domestically and tears it up overseas, too? No one would complain, at least not out loud, but the same split rights that proved a saving grace on “Hot Pursuit” will prevent a huge score for the studio even if “Mad Max” connects beyond expectations.

Taking the safer and more conservative share rights — and risks — is a way of life as the studios churn out big budget movies while their corporate parents sweat the bottom lines. Co-financing becomes more likely as the budget rises since there is more reason to split the exposure as the cost becomes prohibitive, and more chance of a solid return because even a reduced profit margin is significant.

The flip side of the coin would be a movie like the “Avengers: the Age of Ultron.” There are dozens of smaller companies involved to a degree, but the major risks and rewards are Disney and Marvel’s. That’s a rare situation however, as few companies have the financial wherewithal of Disney.

“Splitting rights is a smart strategy because it enables a studio to lower its risk and thus its exposure,” said Rentrak senior analyst Paul Dergarabedian. “And given the high exposure and financial uncertainty of most movie-based investments, this is often the most prudent and conservative way to do business.”

There is no honor in losing your shirt by going all in by yourself on a big and risky movie bet, Dergarabedian said.

“On the other hand lower risk can mean lower rewards. Splitting rights is sort of like buying a lottery ticket with the bowling team — when you win it’s still sweet but ultimately you have to share your winnings with the group,” he added. “It certainly remains an attractive option given the 10s and often 100s of millions involved.”

It not all about risk and rewards, however. Studio and film company partnerships are frequently forged because one party brings a particular skill — say, marketing a teen-skewing film — or has a relationship with a principle player in the films. Sometimes it’s simply a matter of having a working relationship.

Village Roadshow, the Australian company that Warner Bros. is teaming with on “Mad Max,” has a deal with the studio designed for collaborations like this. Since its establishment in 1997, they’ve teamed on more than 70 films including “The Matrix” trilogy and the “Sherlock Holmes” franchise. It’s worked very well on recent hits like “American Sniper” and “The LEGO Movie.”

And it’s very possible that “Max Max” will connect in a big way, but still not get far into the black because of its hefty budget and marketing costs. In which case Warner Bros. will look pretty smart for the split rights approach. Even if it’s not the all-in, go-for-broke approach Mad Max might have taken.

For the record: An earlier version of this story incorrectly named the founders of Rat Pac Entertainment. TheWrap regrets the error.