With streaming giants Netflix, Amazon and Hulu owning more and more of the home entertainment market, along with PlayStation, iPhones, Google Play and scores of other online platforms, Hollywood’s battle to protect movies and TV shows from hackers and pirates has gotten a lot more complicated.

But the mind-boggling boom in these platforms has also given rise to a new and somewhat ironic weapon in the film and TV industry’s ongoing war on piracy. Competition is driving all these new providers to serve up more affordable, accessible and high-quality movies and TV shows than ever before, and Hollywood is banking on consumers losing their appetite for illegal downloading.

“What’s the biggest reason people download content illegally?” asks Guy Finley, head of the Media & Entertainment Services Alliance. “It’s easier and cheaper than going to the movies to sit at a computer and press a few buttons.

“But now, if you’re paying $10 a month to Netflix or Hulu, you get access to that content and much more as well, and it’s a higher quality version, reliably delivered, and you’re not screwing the artists who created it,” he said. “What’s your motivation to download illegally?”

That’s simple supply and demand, though very little about content piracy and intellectual property protection is simple these days. The front in the war is broader and the stakes are higher than ever before, with the entertainment industry providing 1.9 million U.S. jobs, $16.7 billion in revenue and $14.3 billion in exports, according to the Motion Picture Association of America.

Just how much piracy is costing the entertainment industry is hard to say, which is testament to the complexity of the issue. The most recent figure cited by the MPAA is $6.1 billion. But that was based on a 2005 survey, and the industry lobbying group has since avoided putting a dollar figure on piracy altogether, citing changes in the landscape due to the global explosion in streaming. Even the U.S. Government and Accounting Office punted on setting a piracy price tag in a 2010 report to Congress.

The MPAA points to job losses, a negative impact on film investment and ultimately downward pressure on the stock of the content creators’ parent companies. And it’s bought into the idea of beating the pirates to the punch.

“One of the best ways to combat piracy is to make more legal content available to consumers online, which the industry is aggressively doing,” according to Howard Gantman, MPAA’s VP of Strategic Communications. More providers doesn’t necessarily mean more accessibility, because all the options can confuse consumers.

“There are currently more than 450 legitimate services available to access content around the world, and over 115 in the U.S. alone, with more options coming online almost every day,” Gantman said. To make things clearer, the MPAA last year launched wheretowatch.com which provides info on legal content providers and prices. 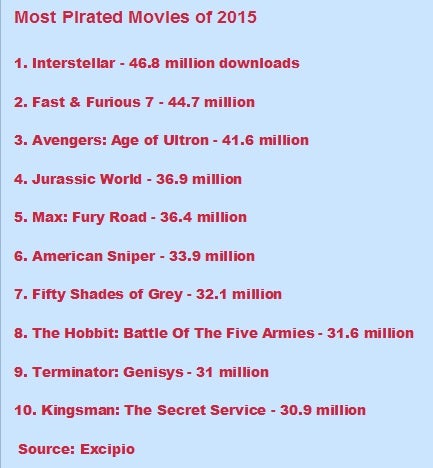 The MPAA is taking other steps as well, from pointing out the proliferation of malware in pirated material to going after the worst offenders in coordinated international legal maneuvers. In November, it shut down Popcorn Time, a torrent so popular and extensive that it was known as the “Netflix of piracy,” with court orders in New Zealand and Canada (but not before its founders uploaded technology that allowed others to duplicate it). It’s also closely watching talks between the studios and exhibitors, who are discussing  narrowing the “window” between a film’s theatrical release and its on-demand availability, when illegal copying often occurs.

That home entertainment is increasingly dominated by digital is undeniable. Subscription streaming revenue for the studios hit $5 billion last year, the second in a row to see a 25-percent gain, according to the Digital Entertainment Group. At the same time, the sale of discs dropped from $6.9 billion in 2014 to $6.1 billion in 2015, a decline of 10.9 percent. Revenue from disc rentals fell 7.5 percent from last year to $3 billion. And as consumers migrate to digital for home entertainment, so have the pirates.

“There will always be somebody selling the hottest Russian soap opera on a street corner in the Ukraine,” says Finley, but Hollywood’s content producers have been able to essentially contain disc-based piracy.

The tide turned because of a multifaceted campaign that included heightening consumer awareness as to the cost and dangers of piracy, intensified enforcement of copyrights laws and key technological advancements, including the watermark Cinavia, which prevents the playback of pirated materials.

It was launched in 2004, when the industry took a stand to protect its new high-definition content. The studios and networks united, insisting the watermark protection be installed in all new viewing devices made by the the leading manufacturers of home entertainment equipment. Up to that point, manufacturers had not been motivated to stop pirates who, they reasoned, still had to buy machines to play their booty. And no company wanted to be first to adopt the technology and then watch rivals capitalize on the pirate market.

Mitch Singer, the former chief digital strategy officer at Sony Pictures Entertainment who is consulting for Verance, the company behind Cinavia, believes that the current introduction of 4K or Ultra High Definition content provides a similar window of opportunity. But he acknowledged that an alliance similar to the one forged in the fight against disc piracy is unlikely. One reason is the far greater number of content providers online, another is that they deliver their content to a consumer’s screen themselves.

Still, Singer maintains, the networks and studios should take a stand unilaterally.

‘Each studio could simply say, ‘If you want your platform to deliver premium 4K content, the devices you control must stop playback of stolen content,’ and I think you’d see results,” he said. “Say you were to prevent illegal downloads on just one type of player, like tablets, even the impact of that would be significant.”

Singer, who is also president of the 75-member industry consortium behind the digital locker UltraViolet system, Digital Entertainment Content Ecosystem, said that without a coordinated campaign of legal enforcement, consumer education, preventative technology, slowing digital piracy “would be a lot like whack-a-mole.”

Educational campaigns designed to educate consumers about the toll exacted by piracy may be having more impact than the MPAA had hoped for. The hackers who leaked the Weinstein Company’s “The Hateful Eight” and other films online just before Christmas have apologized for doing so, even thanking director Quentin Tarantino for his “wonderful” movie.

In a statement to TorrentFreak, Hive-CM8, one of the largest and most notorious piracy groups said they were wrong to leak the movie before it hit theaters and admitted they didn’t realize it would get “that popular that quickly.”