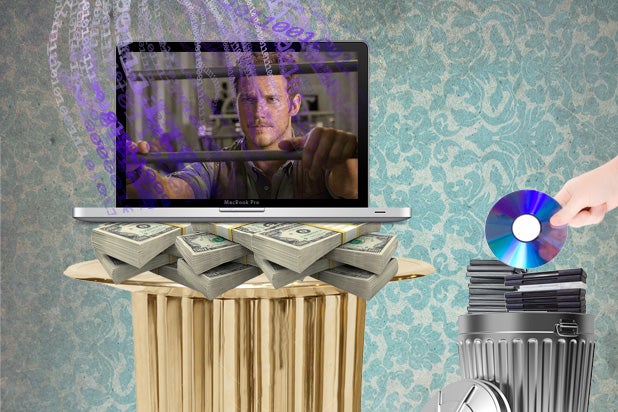 Hollywood has known for years that digital streaming would someday overtake DVD sales, and that day looks like it will arrive in 2016, according to a survey released Wednesday.

Subscription streaming revenue among studios hit $5 billion last year, the second in a row to see a 25 percent gain over the previous year, according to the Digital Entertainment Group report. At the same time, the sale of discs dropped from $6.9 billion in 2014 to $6.1 billion in 2015, a decline of 10.9 percent. Revenue from disc rentals fell 7.5 percent from last year to $3 billion.

Those clear trends suggest this may be the year the tide finally turns. That would be welcome news for Hollywood, which has struggled through the transition to digital. Because the profit margins on streaming options are smaller than those on discs, the studios’ bottom line has been squeezed and that has forced cost cuts.

Last year’s total U.S. home entertainment market rose roughly 1 percent to just over $18 billion last year, according to the DEG, reversing a 1.8 percent decline registered in 2014. But that’s well below the industry peak of $22 billion of 2004.

Among the survey’s other findings:

- Overall electronic sell-through (EST) spending rose 17 percent in the fourth quarter versus the same period last year, up 18 percent for the year.

- UltraViolet accounts grew by nearly 20 percent in 2015, with the total number currently at more than 25 million, with 165 million movies and television shows in UltraViolet libraries.