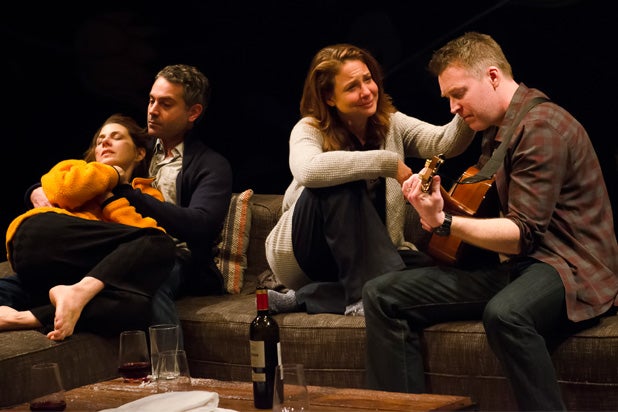 The living room set by David Zinn is ordinary, except for the Henri Rousseau-inspired cyclorama looming behind it. Soon, a life-size slaughtered goat is slowly lowered over the modular sofa and a young woman enters to cut it down and carry the carcass off as if she’d just killed and butchered it. We soon learn that she does indeed do her own killing and butchering of animals. It’s what’s called “ethical slaughtering.” If you want to eat, you must have the guts to kill it.

When a play begins with a goat, you know you’re in for an evening of heavy lifting. Generally, that’s not a good sign. Two modern dramas, however, show us how engrossing that kind of weighty workout can be. Edward Albee’s absorbing “The Goat, or Who Is Sylvia?” references that very significant beast (the word “tragedy” has roots in a Greek word meaning “goat-song”) and, in the process, manages to be very funny, as well as unpretentious. Equally provocative and enlightening is Sarah Ruhl’s new play, “How to Transcend a Happy Marriage,” which opened Monday at LCT’s Mitzi E. Newhouse Theater. That one of the eight characters ends up as a dove and lays three eggs on stage should also defer no theatergoer from seeing Ruhl’s play.

Once again, this playwright has sex on the mind. Her memorable “In the Next Room (or the Vibrator Play)” gave us the fascinating nineteenth-century history of that sex toy. “How to Transcend a Happy Marriage” looks at what may be the future of sex for four of her contemporary characters: One evening at home over cocktails and crudites, Jane (Robin Weigert) entertains her husband, Michael (Brian Hutchison), and their married friends Paul (Omar Metwally) and George (Marisa Tomei, and yes, that is her female character’s name) with stories of her new, young office temp (Lena Hall), who lives in a polyamorous relationship with two equally young men (Austin Smith, David McElwee).

Ruhl definitely knows how to get a play going in its first few minutes. Jane reveals everything she knows about being polyamorous, which has nothing to do with swinging or swapping partners; and soon the two couples are making plans to invite the polyamorous triad over for drinks one night to learn all about loving and having sex among three people.

The operative word here is not “polyamorous” but rather “triad,” and Ruhl conveniently stacks her play with mathematicians, architects, musicians and a teacher of Latin (of all things). Squares and triangles, as well as couples, can be restrictive, but there is also inspiration to be found in those mathematical confines, whether it has everything to do with music and love.

“How to Transcend a Happy Marriage” is two hours with intermission, and it abounds with situations that lead its characters to say the most quotable things, all of which should be experienced live in the theater and not in any critic’s review. They’re that memorable.

Only one of the two married couple’s children appears in the play, but when the young actress Naian Gonzalez Norvind makes her entrance at the end of act one, it is a truly stunning curtain dropper. It also provokes in the second act Ruhl’s most provocative thoughts on sexual intimacy and why it is that parents and children feel compelled to deny each other’s sex life.

There are two great, seemingly throwaway moments before Norvind appears. When Smith’s impossibly worldly character calls Latin the most beautiful language, it inspires the Latin teacher (Tomei) among them to thank him, which immediately leaves her baffled. “I didn’t invent Latin,” George apologizes. A few minutes later, McElwee’s very androgynous character offers the two middle-aged couples some marijuana-enhanced brownies that he baked for the party. After the four “adults” have partaken of his treats, he’s asked to join them. No, he demurs, since he’s the designated driver that night.

They’re standout moments in the play because, while seemingly innocuous, they reveal much about the characters on stage. It’s a talent that, despite her many gifts, Ruhl doesn’t often give such full display. It’s a quibble, but “How to Transcend a Marriage” so abounds with ideas and novel situations that Ruhl’s characters occasionally take a backseat. It may be why Ruhl writes plays and not novels. In the theater, actors can fill in with flesh, blood and emotion what is a mere outline in the script, and here the playwright is blessed with a magnificent cast under the always sensitive direction of Rebecca Taichman. Tomei’s character often addresses the audience directly, and even though George’s journey is fantastical, the actress makes us believe and empathize with her every awkward step forward.

10 Best Theater Productions of 2016, From 'The Crucible' to 'Dear Evan Hansen' (Photos)