Filmmaker Ridley Scott’s second film of 2021 is ready for release. After the medieval drama “The Last Duel,” Scott tackles the intrigue of the Gucci family in the star-studded “House of Gucci.”

Starring Adam Driver as Maurizio Gucci and Lady Gaga as Patrizia Reggiani, the film follows the story of their romance amidst the backdrop of the rise of the Gucci empire, specifically during the period in which Maurizio and Paolo (Jared Leto) started to take the reins from their fathers, Rodolfo (Jeremy Irons) and Aldo (Al Pacino), founder Guccio Gucci’s sons.

The film’s fashion is also notable. In fact, costume designer Janty Yates was given access to Gucci archives for inspiration and at some points, borrowed old Gucci apparel and accessories to dress the actors.

Set to a 1980’s soundtrack, the film follows the behind the scenes of one of fashion’s most iconic brands, from the company to the family dynamic and beyond.

So with “House of Gucci” out, many may be wondering exactly where they can watch it. Your questions answered below.

Will “House of Gucci” Be Available For Streaming?

“House of Gucci” will launch exclusively in theaters on Nov. 24. It will not be available for streaming on its release date. 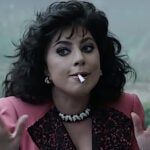 What Is “House of Gucci” About?

Based on of the book “The House of Gucci” by journalist Sarah Gay Forden, who covered the Italian fashion industry from Milan for more than 15 years, the film chronicles the rise and fall of the Gucci empire and family. At the core of the story sits Maurizio Gucci, son of Rodolfo and eventual heir to the brand, along with his wife Patrizia Reggiani. The movie captures the point where Patrizia meets and charms Maurizio, the couples’ marriage and early life together, Maurizio’s eventual inheritance of shares in the company, and the infighting that ensues as Patrizia seduces him into gaining even more power. The story also features clothing items that show the brand’s evolution from leather goods and bags to belts and loafers.

Who Is in the “House of Gucci” Cast?

Are Ridley Scott’s Other Films Streaming?

Some of Scott’s other well-known films are available for streaming, but it depends on subscription tier, streamer and price. “Alien” and “Alien: Covenant” can be found on Hulu with a premium subscription. “Blade Runner” can be streamed on Netflix. “Matchstick Men” is streaming on HBO Max. “Thelma & Louise” is available to stream on YouTube for free with ads. HBO Max has “Black Hawk Down” for streaming.