For nearly 50 years, audiences have been tuning into “Saturday Night Live” for their weekly dose of sketch comedy, satirical news and musical performances. When “SNL” returns to the air, it will be buoyed by 21 players, making Season 47 one of its largest casts to date. The Emmy record-holder picked up seven more trophies at this year’s ceremonies, bringing its grand total to 92.

Before Studio 8H reopens its doors, find out how to stream the premiere, where to watch old episodes and what to look forward to this season.

Where is “SNL” Streaming?

All episodes of “SNL” air weekly on NBC. “SNL” also streams live on NBC’s streaming service, Peacock TV, with a cable subscription, meaning you’ll have to log in with your cable provider.

In case you miss the live show, full episodes are available the next day on Peacock as well as Hulu. For individual clips and sketches, head to the official “Saturday Night Live” YouTube channel. 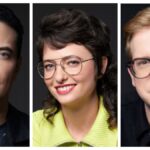 Also Read:
Here Are This Season’s New ‘SNL’ Cast Members and Where You’ve Seen Them Before (Video)

Where Are Past Seasons of “SNL” Streaming?

All 46 seasons of “SNL” are available for streaming on Peacock and Hulu.

Who Will Be Featured in the New Season?

With the exception of Beck Bennett and Lauren Holt, all players will be returning for the new season. The lineup includes veteran cast members Aidy Bryant, Cecily Strong, Kenan Thompson, Kate McKinnon and Pete Davidson, who were rumored to be leaving after Season 46. Bowen Yang and Chloe Fineman were promoted to the repertory level, while Punkie Johnson and Andrew Dismukes remain featured players.

On Sept. 22, “SNL” announced their slate of hosts and musical guests for October. Owen Wilson and Kacey Musgraves will headline the premiere, followed by Kim Kardashian West and Halsey on Oct. 9. Rami Malek and Young Thug will head up the Oct. 16 episode, with Jason Sudeikis and Brandi Carlile closing out the month on Oct. 23.