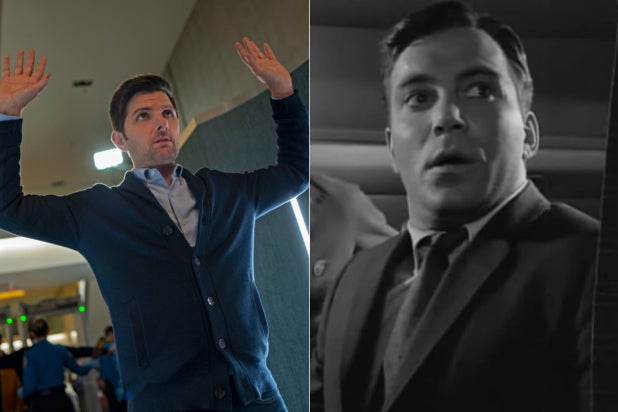 (Not an April Fools’ Joke: This story contains spoilers from the “Twilight Zone” episode, “Nightmare at 30,000 Feet.”)

When CBS All Access first announced that Adam Scott would star in an upcoming “Twilight Zone” episode titled “Nightmare at 30,000 Feet” everyone (including us) figured it would be some kind of homage to that classic William Shatner episode “Nightmare at 20,000 Feet.”

But while it certainly has the same overall structure — a guy is convinced the airplane he’s on is in peril, but nobody believes him — it’s not a straightforward retelling. “We’re trying to have that connection to the past but have our own take,” showrunner Glen Morgan told TheWrap.

The Shatner episode, which aired during the fifth season of Rod Serling’s original series, is arguably the “Twilight Zone” episode that is the most frequently referenced in pop culture. And it’s already been retold once before, in the 1983 homage film, “Twilight Zone: The Movie.”

In case you’ve somehow never seen the episode: Shatner’s Robert Wilson, recovering from a nervous breakdown, sees a gremlin on the wing of his plane wreaking havoc by tearing out parts of the engine. But when he tries to alert the flight crew, the gremlin mysteriously disappears.

Morgan said the main difference between that classic episode on Adam Scott’s version is the main theme they’re going for. In the original episode, it’s a commentary on mental illness. Scott’s Justin Sanderson, meanwhile, believes his plane is in danger after listening to a true-crime podcast he finds in his seat that appears to tell the story of the flight he is currently aboard. Sanderson is described as being a progressive reporter, but once he starts to believe his flight is in danger of disappearing, his unconscious biases immediately come into focus.

“Adam was this ‘woke’ reporter that once he’s on a plane, he starts immediately suspecting the guys with the turbans,” Morgan explains. “He still holds this bigotry.” The ironic twist at the end — where Chris Diamantopoulos, a former pilot who is the only one that believes Sanderson, ends up being the one who crashes the plane — was the whole point. Because of his biases, he didn’t see the real villain was right under his nose the whole time.

“That’s was the main difference,” Morgan said. “The difference was the theme, and what we’re going after.”

But while the episode differed in its general themes, “Nightmare at 30,000 Feet” does feature numerous winks and nods to the original series. The host of the podcast Sanderson listens to is Rodman Edward, a reference to Serling, whose original name is Rodman Edward Serling. The name of the airline — Gold Star — is the same name as the Shatner episode (though in the new version it’s called “Northern Gold Star”). All the pilots and flight crew have the same character names as the original episode too.

And yes, after the flight crashes and the epilogue shows the passengers and wreckage all washing up ashore on some undisclosed island, that doll you see is an exact replica of the gremlin that tortured Shatner’s Robert Wilson in 1963.

“That is one of my greatest, favorite pieces of art, that episode,” Morgan said.