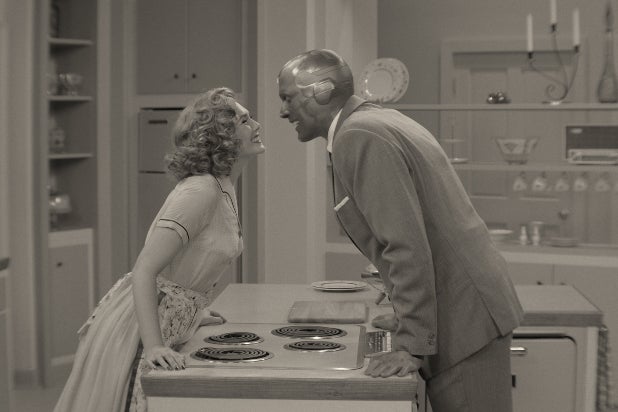 “WandaVision” wasn’t supposed to be here. Prior to the COVID-19 pandemic upending Marvel Studios’ carefully-laid plans, the whacky, sitcom-inspired Disney+ series was expected to cap off the first year of the Marvel Cinematic Universe’s Phase 4, one that included its first foray into episodic television.

Instead, it has to reintroduce the MCU to content-starved Marvel fans who have been waiting (im)patiently since “Spider-Man: Far From Home” swung into theaters some 18 months ago. When “WandaVision” debuts on Friday, it will end the biggest gap between Marvel Studios projects since the powerhouse company was in its earliest days.

“I don’t love that the whole world has been delayed by a year. But if it had to happen, ‘WandaVision’ being our first Disney+ series is perfect,” Marvel Studios chief Kevin Feige told TheWrap. He heralded the 9-episode series as “a bold declaration of new storytelling medium — which is what television is for us at Marvel Studios — in which, on certain levels, ‘WandaVision’ was built to explore in a very direct way.”

In doing so, it aims to prove just how different the MCU will look on Disney+ compared to the big screen. The series finds Elizabeth Olsen’s Wanda Maximoff and Paul Bettany’s Vision living in suburban bliss, in a setting that feels like it was transported from “The Dick Van Dyke Show” or “Bewitched,” before skipping through decades of TV history as fast as people flip through channels on their remote.

For Feige, “WandaVision” enables him to scratch a particular itch that the 24-film “Infinity Saga” has been unable to accomplish: episodic television. “Everything that influenced me as a child and as a fan and as a viewer is what has gone into everything I’ve worked on,” he continued. “One segment of that, that I wasn’t able to, was an obsession with TV, with episodic television, and with sitcoms as a kid.”

Olsen’s Wanda Maximoff debuted in “Avengers: Age of Ultron,” as did Bettany’s Vision (though Bettany has been with the MCU since its beginning, providing the voice to Tony Stark’s A.I., J.A.R.V.I.S.). Despite the two’s weird-but-cute romance playing out in much more detail in the comics, their storyline was often relegated to the background, except when they were needed to provide an emotional gut-punch. “Wanda and Vision are a very unique couple who’ve gone through more trauma and changes than any characters in our films,” he said.

That’s why, when Feige was trying to figure out where the MCU would go after “Avengers: Endgame,” he couldn’t help but stare at some of the pair’s classic comic covers that depicted their stormy relationship. “Those were on my desk for a long time, as I was thinking about what was next,” he explained, adding that he often watched TV as a “comforting” factor while he was finishing the emotionally-heavy “Infinity War” and “Endgame.”

“I sort of questioned why is that? Why is there comfort in these silly dated shows? Exploring that has been a lot of fun.”

“WandaVision” takes its sitcom homages seriously. Matt Shakman, who directed all the episodes, put the cast through a sitcom boot camp and even brought in a dialect coach to help with some of the era-appropriate lingo. The first episode is in black-and-white and was filmed in front of an actual studio audience. Kathryn Hahn, who plays “noisy neighbor” Agnes, said her character is, essentially, a sitcom trope brought to life (who may or may not have more nefarious intentions).

“There’s that person that just stops by uninvited. You don’t really know anything about their personal life, but they seem to know a lot about yours,” Hahn said. “They’re just always around. And for a couple like Wanda and Vision that are trying just to fit in, having this person kind of constantly breathing down their neck sets up for life to be a little bit more difficult.”

While the first episodes largely apes “Dick Van Dyke” and the second one evokes “Bewitched,” as the show powers through eras, it starts to mash-up shows, alluding to how television’s popularity grew throughout the years. Teyonah Parris, who plays the grown-up Monica Rambeau from “Captain Marvel,” describes one episode as “Good Times”-meets-“The Brady Bunch.”

Also Read: Chadwick Boseman Will Be in Marvel/Disney+ Animated Series 'What If...?'

“We’re in a ‘Brady Bunch’ situation, and my point of reference and source was ‘Good Times,'” Parris said. “It’s like a clash of lots of elements and characters, and you’re like, how does this fit? Does that fit? It’s kind of off… I guess it’s meant to be off.”

While its TV roots make sense thematically to kick off the MCU’s Disney+ era, it was initially supposed to air after “The Falcon and the Winter Soldier,” which will now premiere in March. “WandaVision” is the first out of the gate for Phase 4 largely because it was the one that Marvel could complete sooner, given that “Falcon and the Winter Soldier” featured a much more globetrotting shoot.

“We were really lucky that we always knew that after we finished this big chunk, we were gonna have a tiny hiatus,” Hahn said. The pandemic hit during that hiatus, which pushed back their return date. “The work that we had left to do was, for the most part, outside. And so when it was safe to do so, we were able to slip back in there.”