This story about “WandaVision” first appeared in the Down to the Wire issue of TheWrap’s awards magazine.

Ever since Wanda Maximoff and Vision were introduced in 2015’s “Avengers: Age of Ultron,” the onscreen chemistry between Elizabeth Olsen and Paul Bettany has been the closest thing the Marvel Cinematic Universe has had to a love story. With “WandaVision,” Marvel Studios’ first foray into episodic storytelling, that love story finally got the star treatment, as did Olsen and Bettany after years of supporting their more famous fellow Avengers.

“When you’re doing these big ensemble pieces, especially because I was introduced into the Avengers franchise and not a smaller franchise with fewer main characters, it was always about trying to make up my own in-between storylines that I felt grounded or connected from movie to movie,” said Olsen, whose MCU experience up until “WandaVision” had solely been as one of dozens of characters, which left very little time for character development.  “It was really rewarding to then get to create a fully realized character. It’s almost like we got to go all the way back to the beginning with her in our show.”

“WandaVision” was Marvel’s most experimental project to date in that it takes a witch and an android and sends them spinning through TV sitcom history, with episodic homages to “The Dick Van Dyke Show,” “Bewitched” and “Malcom in the Middle.” Head writer Jac Schaeffer and director Matt Shakman took it so seriously that the first episode, which was based on “Dick Van Dyke,” was filmed in front of a live studio audience, much to Olsen and Bettany’s horror. 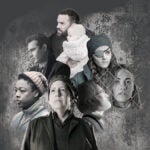 Also Read:
How the Emmy-Nominated Supporting Actors of ‘Handmaid’s Tale’ Have Been Transformed by 4 Seasons of Gilead

“I love the live audience aspect, (but) I didn’t initially,” Bettany said. “I didn’t like the idea and I tried to get out of it, but the actual doing it was extraordinary.” Olsen said it took her back to her musical-theater days as a child — though, like Bettany, she was initially “mortified” and found the whole experience “terrifying” before eventually conceding, “It was so fun.”

But the sitcom-within-a-show conceit stopped seeming like a gimmick once “WandaVision” revealed the tragic reason why Wanda subjugated an entire New Jersey town into living out her sitcom fantasy. “She has this insoluble problem, which is that the people that she loved have died,” Bettany said. “So she creates the world in which those people are back, and they’re faced with seemingly insoluble problems that are sort of soluble if they come together as a team, as a family. That is the bedrock of early American sitcoms.”

The bulk of the show was filmed prior to the pandemic and all the release-date shuffles that followed — and, Bettany said, they felt a sense of freedom: “We thought we’d be this sort of niche, little show.” But the little show became a sensation, and Emmy voters gave it 23 nominations, only one behind “The Crown” and “The Mandalorian.” The noms include ones for Olsen and Bettany, one for Kathryn Hahn’s supporting role as Agatha Harkness and one for Outstanding Limited Series.

Though the MCU has ruled over the box office and pop culture ever since Tony Stark first donned the Iron Man armor in 2008, Bettany sees the Emmy love — fellow Marvel series “The Falcon and the Winter Soldier” also scored five nominations — as the ultimate vindication for the MCU’s architect, Kevin Feige.

“He has been kind of overlooked, I think in large part, by those (voting) bodies,” said Bettany, who has been with the MCU since that first movie when he was just the voice of Stark’s A.I., J.A.R.V.I.S. “I’m really proud of him, because he’s somebody who has made lots of different types of films. I can promise you those are really hard to make.”