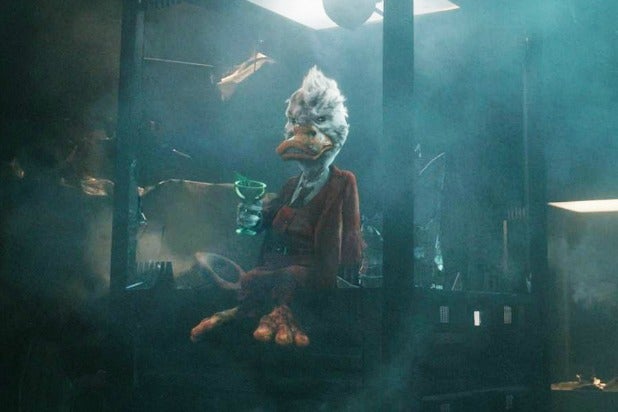 With its partnership with Netflix winding down, Marvel TV is taking its characters to Hulu, signing a hefty deal for multiple animated series, including “Howard the Duck.”

The agreement will see Marvel TV produce four adult animated series — “Howard the Duck,” “M.O.D.O.K..” “Hit-Monkey” and “Tigra & Dazzler” — that will culminate in a crossover special, “The Offenders.” The four series are being written and executive produced by the likes of Patton Oswalt, Kevin Smith, Chelsea Handler, and the “Blades of Glory” directing team of Josh Gordon and Will Speck.

The deal comes as Marvel’s parent company Disney is about to assume 60 percent control of Hulu as part of its deal with 21st Century Fox.

“Howard the Duck” is being written by Smith and David Willis, who co-created Adult Swim’s popular animated series “Aqua Teen Hunger Force.” Trapped in a world he never made, America’s favorite fighting fowl hopes to return home with the help of his unstoppable gal pal Beverly before the evil Dr. Bong can turn him into the crispiest dish on the menu.

The 1986 live-action “Howard the Duck” film was a critical and commercial failure, though it’s gained a cult following since. A computer-generated version of “Howard the Duck” (voiced by Seth Green) has made cameos in both “Guardians of the Galaxy” films.

Oswalt is writing “Marvel’s M.O.D.O.K,” which centers around an egomaniacal supervillain with a really big head and a really little body, who struggles to maintain control of his evil organization and his demanding family. Jordan Blum is co-writer and executive producer. Gordan and Speck are writing “Marvel’s Hit-Monkey,” which tells the darkly cinematic and brutally funny revenge tale of a wronged Japanese snow monkey, mentored by the ghost of an American assassin, as he cuts a wide swath through the Tokyo underworld.

“Marvel’s The Offenders” is a story in which MODOK, Dazzler, Tigra, Hit Monkey and Howard the Duck are all forced to team up in order to save the world and certain parts of the Universe. The one-off special doesn’t have a writer yet. Marvel TV head Jeph Loeb serves as executive producer on all the series.

The deal with Hulu is very similar to the one Marvel TV signed with Netflix back in 2015, in which the studio was to produce four live-action series that also culminated with a team-up special. But that partnership appears to be ending. Netflix has already canceled “Daredevil,” “Iron Fist” and “Luke Cage.” With the second season of “The Punisher” debuting last month, only the third season of “Jessica Jones” remains from that deal.