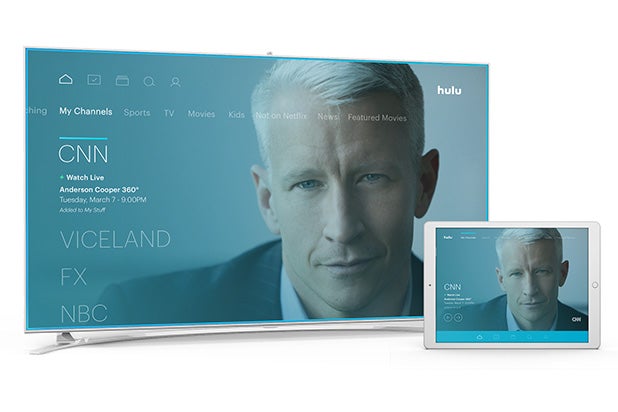 The company also announced that Scripps Networks Interactive channels, including HGTV, Travel Channel and Food Network have been added to both the live service and the Hulu’s previous SVOD offering.

The launch follows news on Monday that Hulu had reached a new distribution agreement to bring NBC and Telemundo-owned stations to the service. Hulu also has deals with A+E Networks, 21st Century Fox, The Walt Disney Company, Turner Networks and CBS Corporation.

The new live TV service will cost $39.99 per month, with additional costs for commercial-free on-demand, cloud DVR and multiple-screen streaming.

“Nearly a decade ago, Hulu forever redefined the way people watch TV. Today, as we add live sports, news and entertainment and introduce a more intuitive Hulu, we want to redefine the way people experience TV,” Hopkins said in a statement. “By bringing together thousands of live, on-demand and library shows and movies — and serving them up in a uniquely personalized way — Hulu can now be a viewer’s primary source of television. It’s a natural extension of our business, and an exciting new chapter for Hulu.”

“We have always believed that TV should fit your lifestyle, not the other way around,” Ben Smith, Hulu’s SVP and Head of Experience, continued. “You shouldn’t have to think about whether something is live, recorded or on demand, or care about which device you’re using. TV is about connecting with the shows, movies and sports you love — and we want to make that really easy for you, no matter where you’re watching.”

Photographed by Shanna Fisher for TheWrap