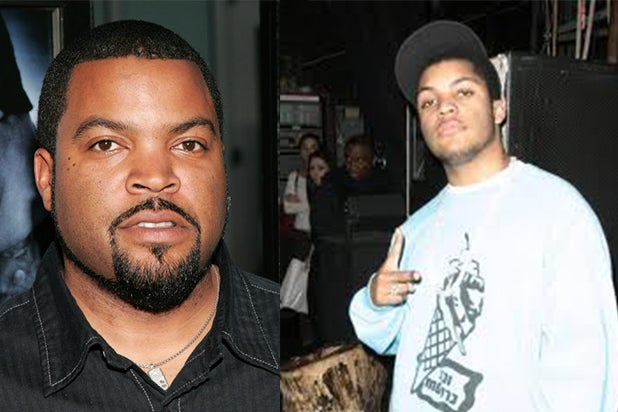 Universal did not confirm the casting.

Gray (“The Italian Job”) is directing from a script by Jonathan Herman, which Ice Cube has previously described as a comprehensive “dramatic story that encompasses hip-hop, dope-dealing, Reaganomics, AIDS, LAPD, rap feuds, FBI, PMRC, the Parental Advisory stickers on the records… all of it.”

Ice Cube revealed in February that he was pushing for his son to play him in “Compton,” telling The Guardian “I’ve been trying to get that pushed along. Just wanna make sure that he’s the best man for the job.”

However, the aspiring young actor still had to prove himself. Nepotism is an old-fashioned Hollywood tradition but as a producer, Ice Cube had a responsibility to audition multiple candidates, from authentic rappers to professional actors.

According to several sources, Ice Cube convinced Universal executives that despite his lack of acting experience, O’Shea Jr. could handle the pressure and was up for the challenge.

Eazy-E’s son has also been lobbying for a role but TheWrap hears that an unknown actor is poised to win the part, and that Universal could announce the main cast before the end of the week. It would mark the end of a long search, as casting director Cindy Tolan held an open casting call in Gardena, Calif. in March seeking appropriately-aged African-American males, with no experience necessary.

Ice Cube is producing the movie with Dr. Dre and Easy-E’s widow, Tomica Woods-Wright, and the trio have casting approval.

Will Packer and Cube Vision’s Matt Alvarez are also producing and have been driving forces behind the project. Along with Ice Cube, the duo have some leverage at Universal, as they’re also behind the studio’s hit comedy “Ride Along,” which is getting a sequel that is due in theaters on Jan. 15, 2016.

It’s unclear whether “Straight Outta Compton” has received an official greenlight from Universal yet, but it’s clearly looking good, as Gray recently shot a end-credits sequence for the film that features Ice Cube and Dr. Dre discussing the legacy of N.W.A.

Ice Cube was a teenager from South Central when N.W.A. was formed in Compton as Dr. Dre and Eazy-E were in their early 20s. The other founding members of N.W.A. were DJ Yella and Arabian Prince, the latter of whom left N.W.A. in 1988, shortly after MC Ren joined the group.

The group was active from 1986 to 1991, during which time their explicit lyrics garnered nationwide controversy (especially “Fuck tha Police”), leading to the group being banned from many mainstream radio stations in the U.S.

With more than 10 million records sold, N.W.A. was included in Rolling Stone’s 100 Greatest Artists of All Time.

“Straight Outta Compton” was originally set up at New Line before Universal pick it up out of turnaround. The film’s budgeted is expected to be less than $25 million.