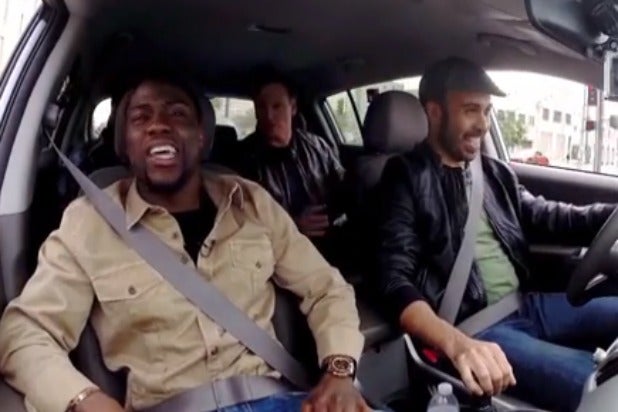 A guy named Anthony’s afternoon got a lot more interesting when Conan O’Brien, Ice Cube and Kevin Hart caught a ride with him in his pink-mustachioed car.

On Wednesday’s “Conan,” the trio used a ride-share app to catch a ride with Anthony. Things started awkwardly, with the three waiting on a corner for their ride.

Later, Conan tried to do exactly that to pay for their ride. Anthony passed, but he was down for whatever else they wanted to do.

They couldn’t find the “weed spot” Cube wanted, but did swing by a convenience store for 40 ounces, Swisher Sweets, lottery tickets, Nutella and a DVD of “Ghosts of Girlfriends Past.” Conan beat boxed. They stopped by Runyon Canyon.

Why did this happen? Would you believe Cube and Hart have a new movie called “Ride Along”? Good product integration, everyone. Especially Swisher Sweets.