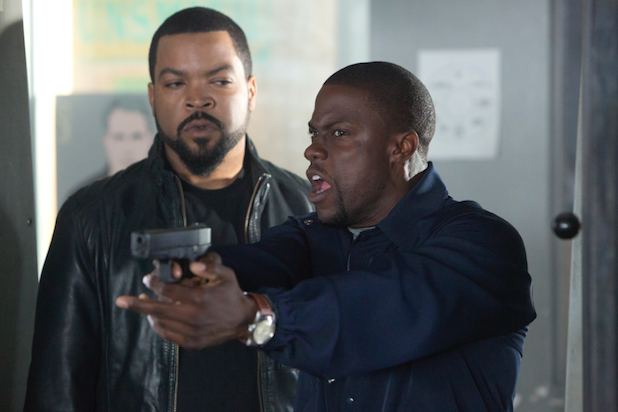 Universal Pictures is gearing up a sequel to “Ride Along” and stars Kevin Hart and Ice Cube, as well as director Tim Story and producer Will Packer, are along for the ride, an individual familiar with the project has told TheWrap.

Hart and Ice Cube are nearing deals to reprise their roles in the sequel, which is expected to start production this summer. The sequel is expected to feature more action and target a broader audience, according to a studio insider.

The original, which has grossed more than $120 million worldwide, found security guard Hart accompanying his future brother-in-law cop on a ride along involving shootings, explosions and other mayhem.

Also read: How Kevin Hart’s ‘Ride Along’ and ‘About Last Night’ Are Double-Crushing the Box Office

Story will direct from a script by Phil Hay and Matt Manfredi, and Packer will produce through his Rainforest Films banner along with Ice Cube and Matt Alvarez’s company Cube Vision, as well as Larry Brezner.

Universal executive Scott Bernstein will oversee the project for the studio.

Hart will soon be seen in Story and Packer’s other sequel, “Think Like a Man Too,” which hits theaters on June 20. He currently stars alongside Michael Ealy in the “About Last Night” remake, which opened to strong box office over the weekend.

See video: Kevin Hart Leads Battle of the Sexes Through Las Vegas in ‘Think Like a Man Too’ Trailer

Hart, who was a major presence at NBA All-Star Weekend, will spend the spring filming WB’s comedy “Get Hard” with Will Ferrell. That film and “Ride Along 2” don’t have release dates yet, but another Hart movie has already claimed next year’s MLK holiday weekend, as Screen Gems and Miramax will release the Packer-produced comedy “The Wedding Ringer” in January 2015.

Hart is repped by 3 Arts Entertainment and UTA, which also reps Ice Cube and Story.