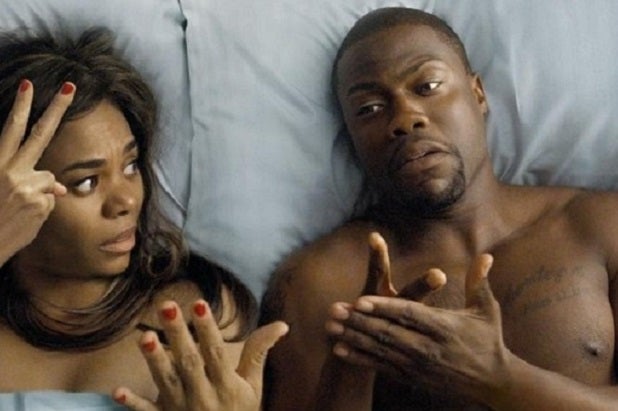 Kevin Hart fans were seeing double at the box office this weekend — and some paying double, judging by results — proving again that the “Ride Along” and “About Last Night” star is one of Hollywood’s few bankable young talents.

Sony’s romantic comedy remake “About Last Night,” on its way to a $28.5 million opening over the Presidents Day weekend, will finish second only to “The Lego Movie” juggernaut. Universal distributed “Ride Along,” which spun out $10 million in its fifth weekend for a whopping $117 million so far.

If you count his big performance in the NBA’s celebrity All-Star game, Hart pulled off a triple-double this weekend — but the box-office two-fer alone was impressive with the two films accounting for $38.5 million.

The opening of “About Last Night” didn’t match the record $41 million Martin Luther King weekend debut of “Ride Along” in January. But the Valentine’s Day weekend comedy — in which Hart stars with Michael Ealy, Regina Hall and Paula Patton — was R-rated, and so couldn’t draw younger moviegoers.

Hart’s high profile across multiple platforms makes him a one-man movie marketing machine. He’s a cable TV comedy staple and this weekend he was shamelessly pumping “About Last Night” at the NBA event. He’s big on social media, with nearly 10 million Twitter followers, and he’s not afraid to use them:

If you haven’t seen my new movie “About Last Night” yet WHAT IN THE HELL ARE YOU WAITING FOR???? It’s REALLY GOOD SO GET UP & GO SEE IT

Would Hart do an overall deal in Hollywood? Sony would love to have another Adam Sandler-sized comedy blue chip on its board, and the studio has to be looking forward to June, when Hart will be back for “Think Like a Man Too.” The sequel was directed by Tim Story and produced by Will Packer, who was also behind “About Last Night” and “Ride Along.”

But Hart’s DIY strategy keeps turning up hits, and with the in-production comedy “The Wedding Ringer,” he’s working with Screen Gems and Miramax for a 2015 release.

Double dips by actors in two movies in wide release at the same time aren’t that unusual. Tom Hanks overlapped in “Captain Phillips” and Disney’s “Saving Mr. Banks” for a few weeks recently. Sony’s pirate saga opened in October and has made $106 million, while the Disney drama has taken in $82 million domestically since its December debut.

James Franco had a fun double last March, when he was starring as the wiz in Disney’s “Oz the Great and Powerful” and the gangster rapper Alien in “Spring Breakers.” The A24 crime romp opened to $4.8 million on the same weekend that “Oz” was taking in $21 million and getting knocked off after two weeks at No. 1 by “The Croods.”

But it doesn’t always work out.

Ryan Reynolds pulled off a dubious double last July, when he starred in “R.I.P.D.” and was one of the voices in “Turbo.” Fox’s animated snail tail opened to a soft $21 million on the same weekend that Universal’s pricey cowboy ghost tale debuted with just $12 million and became one of 2013’s biggest bombs.

MGM’s “Robocop” finished third with $25.6 million over the four days and has brought in $30.5 million since opening Wednesday.

Universal modestly-budgeted “Endless Love,” which earned an A- Cinema Score, opened to $15 million over the four days and was fifth, behind George Clooney’s World War II art heist saga “The Monuments Men,” which will bring in $18 million in its second week.