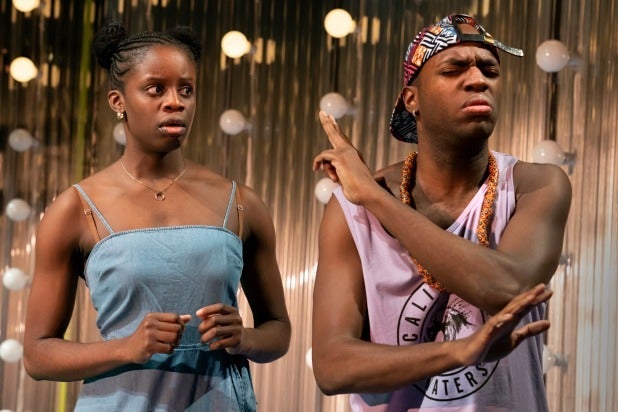 Tori Sampson takes a West African fable and turns it into an all-American cartoon geared for the afterschool-special crowd. Too bad that few adolescents will be attending a play titled “If Pretty Hurts Ugly Must Be a Muhf–a,” which opened Sunday at Playwrights Horizons. Urban Dictionary and Wiktionary give no synonyms for “muhf–a,” except the word’s unprintable definition. For clarity’s sake, let’s substitute “real bummer” or “bringdown,” which gives a much better idea of Sampson’s gentle cautionary tale. Those theatergoers expecting something edgy or provocative from “Muhf–a” will be disappointed.

Since Broadway and the major non-profits aren’t producing Neil LaBute this season, it’s appropriate that someone has taken up the body-image problem. In the village of Affreakah-Amirrorikah, a teenager named Akim (Nike Uche Kadri) is the undisputed beauty, which turns her into the natural rival of the stout Kaya (Phumzile Sitole), the overly petite Adama (Mirirai Sithole), and the callipygous Massassi (Antoinette Crowe-Legacy), who loses her boyfriend, Kasim (Leland Fowler), to the aforementioned prettiest girl in town. Somehow, Akim’s being slightly taller than Kasim is not a “muhf–a,” making this place very different from any middle school in America — excuse me, Amirrorikah.

The most fascinating aspect of “Muhf–a” is how Sampson misleads us into thinking the play is about one character, the pretty one, when it’s really about one of the other young women. That singular pleasure, however, can’t be savored until the evening is almost over.

Until then, you have to deal with confusing plot twists that turn Akim’s father (Jason Bowen) into the villain because he overprotects his daughter so she won’t end up with guys like Kasim.

Leah C. Gardiner has directed the cast to scream their lines; louder is inherently funnier until it’s downright painful. The exception is Mirirai Sithole, who turns Adama’s every appearance into a charming, delightful respite from the noise around her, which includes Louisa Thompson’s set and Matt Frey’s lighting. The two designers have re-created a 1970’s discotheque on stage, and it’s presided over by a rhinestone-bedecked Chorus, if one person (Rotimi Agbabiaka) can be called a chorus, who narrates the play. The poster and program for “Muhf–a” depicts a young woman wearing bejeweled sunglasses, but it is the Chorus who wears them in the play.

Dede Ayite’s costumes are kind of African — excuse me, Affreakahn — except for the Chorus, who is made up to look like a Joel Grey with bling from “Cabaret.” Maybe the Chorus should extend his duties of giving plot points (almost every plot point) to tell the young women how he manages to be so fabulous, beautiful, and happy with himself.