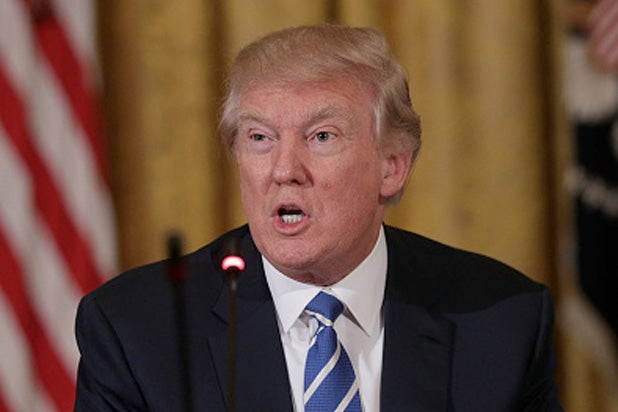 Donald Trump consumes so much news that White House staffers have tried to limit the president’s television viewing and control some of what he reads — but they also makes sure he notices particular stories, according to a new report by the Associated Press.

“No recent president has been so public about his interest in his media coverage, nor seemed so willing to mobilize the powers of the federal government based on a media report that he has just read, heard or watched,” AP reporter Jon Lemire writes.

Lemire’s peek into Trump’s media diet alleges that the president “usually rises before 6 a.m. and first watches TV in the residence before later moving to a small dining room in the West Wing,” where he is handed a stack of newspapers.” “Senior staffers occasionally slip in an article they want him to see,” adds Lemire.

The list of papers supposedly includes The New York Times, The Wall Street Journal, The Financial Times, The Washington Post, The New York Post and printed articles from other sources including conservative online outlets like Breitbart News, per the AP.

Trump often calls the media “fake news” or refers to the industry as the “opposition party,” but that doesn’t stop him from consuming a ton of it.

“The president’s cable TV menu fluctuates,” writes Lemire. “Fox News is a constant, and he also frequently watches CNN despite deriding it as ‘fake news.’ Though he used to watch ‘Morning Joe,’ a Trump aide said the president has grown frustrated with his coverage on the MSNBC program and has largely stopped.”

Trump is a self-professed fan of Fox News’ morning show “Fox & Friends,” and has frequently tweeted information or statistics immediately after they’re listed on the show.

One network Trump presumably doesn’t watch a ton of, outside of “Morning Joe,” is MSNBC, which has a left-leaning primetime lineup that has been extremely critical of the president. The network’s biggest star, Rachel Maddow, recently told TheWrap her strategy for covering Trump.

“We developed sort of an informal, internal mantra… which is that we basically cover them as if they are a silent movie,” Maddow said. “I stopped covering the Twitter feed and we started covering only what they do rather than what they say.”

According to the AP, Trump isn’t only watching to see what pundits have to say.

“He also avidly watches his own staff’s TV performances, including White House Press Secretary Sean Spicer’s daily briefing. Aides have been known to shape their public comments to please the president or try to influence him,” Lemire writes.