“Inside Out 2” was announced at Disney’s D23 Expo on Friday by star Amy Poehler and Pixar head Pete Docter, with a theatrical release set for June 2024.

Back in 2015, the first installment of the animated adventure, co-directed by Docter and Ronnie Del Carmen and written by Michael Arndt, starred Riley (Kaitlyn Dias) as she faced her feelings about growing up and moving to San Francisco for her dad’s new job.

“Inside Out” won the Oscar for Best Animated Feature at the 2016 Academy Awards. It was also nominated for Best Writing and Best Original Screenplay.

Originally from Minnesota, Riley has a tough time adjusting to the Bay Area, so her five feelings, personified inside her head as Joy (Poehler), Fear (Bill Hader), Anger (Lewis Black), Disgust (Mindy Kaling) and Sadness (Phyllis Smith) guide her through the transition, watching her mindset shift and change in the process.

Plot details were light, though Poehler revealed that the story will take place several years after the first film with Riley as a teenager and new emotions making their debut. Kelsey Mann will take over from Docter as director with “Inside Out” co-writer Meg LeFauve returning to write the script. 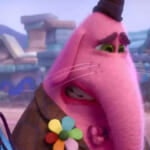 Also Read:
The 9 Most Emotional Pixar Moments So Far, From ‘Up’ to Bing Bong (Photos)

While Pixar suffered a rare box office failure this year with the terrible performance of “Lightyear,” the studio had become a key pillar of the summer box office in the years prior to the pandemic. That summer hot streak was mostly driven by sequels like “Finding Dory” and “Incredibles 2” but began with “Inside Out” as it grossed $356 million domestic and $857 million worldwide despite heavy competition from “Jurassic World.”

With such popularity among Pixar fans, the sequel is an instant favorite to be a billion-dollar success in summer 2024, which is slowly loading up its slate with films like Marvel’s “Captain America: New World Order” and “Thunderbolts,” Warner Bros.’ “Mad Max” spinoff “Furiosa,” Universal/Illumination’s “Despicable Me 4” and Paramount’s “Mission: Impossible — Dead Reckoning, Pt. 2.”