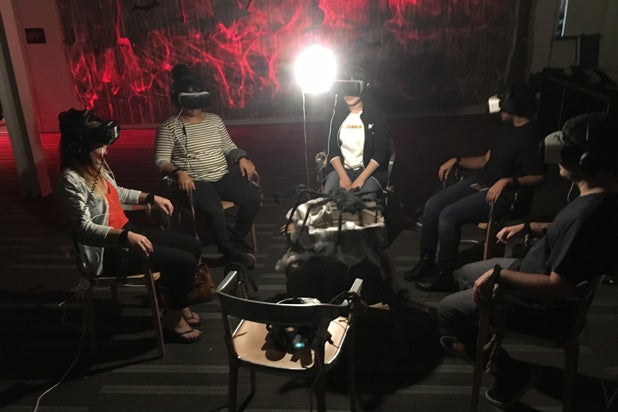 Virtual reality, which thousands of people are betting billions of dollars it will be a big part of the future of entertainment, is at a crossroads.

Equipment sales have hit a plateau despite price chops, and even for those who shell out hundreds of dollars for an Oculus Rift or HTC Vive and a gaming PC, there’s not exactly a Netflix-sized pool of premium content to wade their way through.

That shouldn’t be too surprising – after all, the entire technology is only a few years old. But fortunately, the next generation of potential VR impresarios – and maybe even its first Steven Spielberg or James Cameron – is already working on it, with the help of one California university who’s placed a big bet on virtual reality.

Chapman University in Orange, California, is the alma mater of Hollywood power players like “Stranger Things” creators the Duffer Brothers – who recently appeared at an event on campus. And its Dodge College of Film and Media Arts also has a virtual reality program where students are producing legitimately professional work. In an industry far on entertainment’s frontier without an establishment of any kind, there’s plenty of room for upstarts to reach the top.

Also Read: Is This How Virtual Reality Goes Mainstream?

Luke Snedecor, a sophomore in the school’s digital arts program, showed TheWrap a VR experience he created called “At Sea” where the user interacted with a fisherman on a raft. Bending your knees allowed you to look underwater, where you could grab fish using the Oculus hand controllers and toss them to the lone mariner. There was also an underwater mine to which TheWrap led a shark, using fish as bait, keeping the fisherman out of danger.

While the project did not have the budget of some of the virtual reality experiences that are coming out of massive brands or major studios, it was hardly amateur in comparison – and was more intuitive to play with than many commercial applications. As it turns out, professional-quality VR isn’t yet exclusive to any kind of professional class.

Snedecor, who’s only been developing in virtual reality for about a year, likes the idea of working in an industry without an establishment, especially as traditional media companies are still navigating their way through digital disruption.

Bill Kroyer, a veteran animation director who helmed “FernGully: The Last Rainforest” and currently serves as the director of the Digital Arts Program, showed TheWrap “The Harvest,” Chapman’s capstone – at least, to date – virtual reality project.

While too many virtual reality experiences TheWrap has seen seem like they were in VR for VR’s sake, “The Harvest,” in which the user is shackled to a chair in a barn – is ideal for the technology. The experience was made possible by sponsorship from chip giant AMD.

Also Read: Enter a 3-D Jungle With 'Jumanji' in Virtual Reality This December

“There was a legitimate reason to put it in a VR experience and design elements to match that,” Kroyer said.

Rather than rely on CGI, the experience was filmed with real actors inside a 75-year-old barn at the Burbank Equestrian Center that hadn’t been cleaned in years.

“It looked like a demented guy would own this,” Kroyer said.

The rats, bats and spiders were all computer-generated, however. It was shot with one camera on a nodal axis. And there was also a VR game type experience and AR demo in addition with the main “Harvest” narrative piece.

Madeline Warren, an associate professor on the artistic faculty, said that while most schools are focusing their forays into VR on the engineering departments, Chapman has made a deliberate decision to base it out of the film school.

“A lot of the VR development has been siloed in engineering,” she said. “They don’t have the storytelling skills.”

Also Read: Virtual Reality Leaders on What It'll Take to Bring VR to the Mainstream

And even though Kroyer is a Hollywood lifer, he thinks entertainment will be only a small part of VR’s eventual impact, paling in comparison to medical and educational uses. However, entertainment is likely to be the first way most people experience the technology, so there’s a lot at stake in creating compelling and engaging stuff.

Kroyer credits Chapman’s “salon” model for encouraging a cross-disciplinary look at VR – a technology that needs storytellers arguably as much as it needs engineers to build those experiences. After all, if we want people to dedicate more and more time to immersive experiences, those virtual worlds have to be interesting – and creatives can certainly help with that.

“This is a technology that would benefit from that thinking,” Warren said.