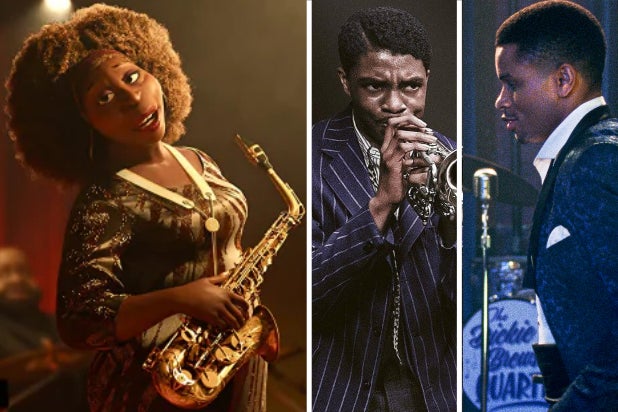 But Viola Davis’ title character in Netflix’s “Ma Rainey’s Black Bottom,” disagrees: “Blues helps you get out of bed in the morning.”

Who would have thought that one of the notable trends in filmed entertainment at this time would be an American art form born more than 120 years ago? Amid the stalled and rearranged film landscape of 2020, just as the Black Lives Matter movement re-emerged as a cultural force, numerous film and TV projects are celebrating jazz, blues and other music associated with the Black experience, and its historically challenging path to full respect.

Besides those “Sylvie’s Love” and “Ma Rainey,” consider “The Eddy,” a Damien Chazelle Netflix series starring André Holland as a musician running a Paris jazz club. Or Steve McQueen’s “Small Axe” anthology, which is filled with the sounds of Black British life (“The narrative is told through music,” McQueen said on “The Big Picture” podcast, “like putting together an album”). Next month, Hulu will release Lee Daniels’ feature “The United States vs Billie Holiday,” penned by playwright Suzan-Lori Parks.

Also Read: Hear Andra Day Sing 'What the F-' She Wants in 'The United States Vs. Billie Holiday' Trailer (Video)

Then there is “Soul,” Pixar’s latest, which focuses on a Black band teacher whose passion is playing jazz. He eventually teams up (up there) with a feline doppelganger who learns to love it, too. “One Night in Miami,” (due on Amazon on January 18) is not about music, per se, but features 1950s and ’60s pop and gospel singer Sam Cooke being lectured by Malcolm X for not using his fame to a better purpose. His final composition, “A Change Is Gonna Come,” became an anthem for the civil rights cause.

It may surprise some to learn that Cooke recorded “A Snatch of Jazz Music Volume 1,” which can be found on Spotify. But he knew from where he came. “Jazz is America’s one true original art form,” said Fabrice Lecomte, who composed all the music — including that played by the band — in “Sylvie’s Love.” Largely a composer of classical music, Lecomte has been a jazz aficionado all his life. “This could be a resurgence and I’m honored to be part of it,” he said of the current films. The authenticity of their music is primary. Jon Batiste similarly composed original music played by the pianist in “Soul.”

There is often confusion over the difference between blues and jazz, which both originated in the American South — blues, first, in the Delta, and then jazz in New Orleans — by the end of the 19th century. “They are definitely related,” Wayne Escoffery, who lectures on jazz at the Yale School of Music, explained. “They were born out of the same set of circumstances: slavery and Reconstruction.”

Blues almost always includes lyrics, employs a few basic chords and tends to be performed solo. Jazz veers toward instrumentals and improvisation and usually consists of ensembles. With the current film projects, the two genres can intersect. In fact, Ma Rainey may talk Blues, but one of her groups was called Ma Rainey and Her Georgia Jazz Band. In the film, Chadwick Boseman’s ambitious trumpeter is verbally punished for “improving,” a hint of the coming expansion into jazz.

The new projects fit well with how and why the music was created and shared in the first place; as forms of defiance, (not unlike ragtime, rock ‘n’ roll, and folk music would be later) often becoming the sole means of sharing stories. Between the 1920s and 1940s, “race records” were recorded and released, primarily by and for Blacks, though the artists were regularly exploited and ripped off by white artists. As James Erskine said, “Both Ma Rainey and Billie Holiday had to deal with the appropriation of their music. I hope the films shed a light on such historical and musical injustices.”

Those injustices have been part of film history, starting with the very first talkie, Al Jolson’s “The Jazz Singer.” That 1927 film classic was about a Jewish cantor who dons blackface to join a pop group. (Oy!) Bing Crosby, to his credit, promoted the musical genre and performed “Now You Has Jazz” with one of its icons, Louis Armstrong, in 1956’s “High Society.” But the film was about Crosby, Frank Sinatra and Grace Kelly in the land of the rich and entitled. For too long, white artists received the recognition due elsewhere. The first successful jazz album, in 1917, was by the Original New Orleans Dixieland Band, comprised of five white men. Let’s not forget that Elvis’ first hit was “That’s All Right (Mama),” though the original was written and performed by black bluesman Arthur Crudup.

Fabrice Lecomte’s hope is that the new films and TV shows will not only help give credit where it’s due, but bring in new fans. “My fear is that jazz became an intellectual niche, at which time we lost the youngsters,” he said.

Escoffery is more optimistic: “Students are becoming more and more interested in the historical significance of jazz, its use as a tool for integration and its place in the struggle for equality in America, just as much as being interested in the music itself.”

Popular and proven artists also help. Lin-Manuel Miranda has said he imagined Thomas Jefferson as “the jazz leading to Alexander Hamilton’s hip-hop.” In Martin Scorsese’s new documentary about Fran Lebowitz, the two discuss her love of Charles Mingus and the incomparable craft of Duke Ellington.

Wynton Marsalis, the artistic director of jazz at Lincoln Center, adds, “Jazz music is the perfect metaphor for democracy.” (Beginning January 15, you can stream his latest work, “For Democracy! Suite.”) In the meantime, re-watch Ken Burns’ 10 episodes of “Jazz” which, despite what Sylvie’s saxophonist was told, is clearly still very cool.

For the record: A previous version of this story misspelled Suzan-Lori Parks and Billie Holiday.