Paramount is developing an untitled sci-fi project from “Loving” director Jeff Nichols, according to an individual with knowledge of the project.

Details about the project are being kept under wraps. Before he gets to that, however, Nichols will write and direct a third installment of Paramount Pictures’ “A Quiet Place” franchise, based on an original idea by John Krasinski, who helmed the first two movies.

Paramount Pictures has dated an untitled “A Quiet Place” film for March 31, 2023. Michael Bay, Andrew Form and Brad Fuller will produce via Platinum Dunes, alongside Krasinski through his Sunday Night banner with partner Allyson Seeger. Seeger will also serve as executive producer. 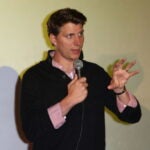 “A Quiet Place Part II,” which is currently playing in theaters, is taking a sharper drop than the first “Quiet Place,” with the sequel’s $88.6 million 10-day total falling lower than the $100 million earned by the first film after 10 days. Even so, Krasinski’s film is set to become the first film since the pandemic to gross over $100 million in North America, as “Godzilla vs. Kong” has stalled out at $99 million over two months into its run.

Nichols’ most recent credit is “Loving,” which earned an Oscar nomination for star Ruth Negga. His other credits include “Midnight Special,” “Take Shelter” and “Mud.”