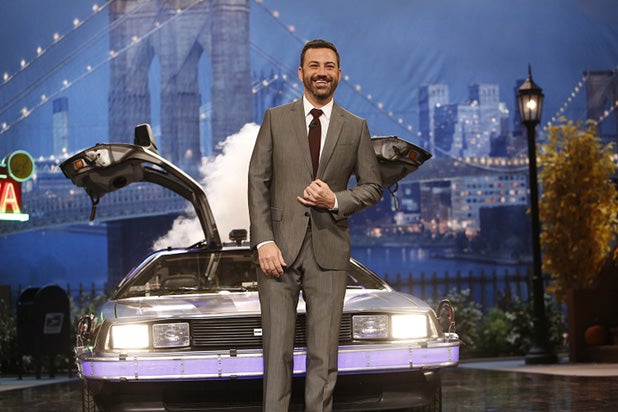 Last week, five repeats of “The Tonight Show” bested five originals of “Jimmy Kimmel Live!” To make matters worse — or at least, more dramatic — those new ABC episodes all took place in Brooklyn instead of Los Angeles, marking a ratings stunt of sorts for the travel-happy Jimmy Kimmel in Fallon’s backyard.

The road trip didn’t quite work out that well for ABC, though its show did hit seven-month highs in both the key demo and among total viewers. That said, like Fallon, CBS competition Stephen Colbert was also in reruns last week. And those seven-month-ago figures? Those were from Kimmel’s last road trip, which was in Austin, Texas, for South by Southwest.

“Late Show” reruns got a 0.57/3 and 2.3 million viewers. It’s worth pointing out that Thursday’s CBS encore was delayed by an NFL football overrun.

There was one definite highlight for ABC’s 11:35 p.m. offering: With guests Michael J. Fox and Democratic Presidential candidate Bernie Sanders, Kimmel scored his strongest Wednesday telecast (pictured above) in almost a year per both main metrics.