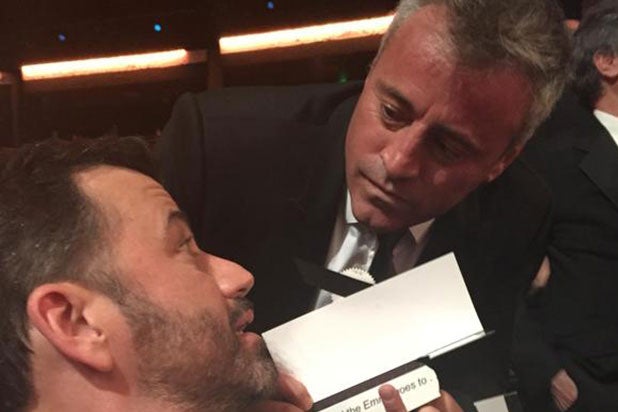 Matt LeBlanc wasn’t actually mad at Jimmy Kimmel‘s for an Emmy joke he cracked while presenting the award for Outstanding Lead Actor in a Comedy Series on Sunday.

Although the ABC late-night host posted a picture of the former “Friends” star giving him the middle finger, Kimmel clarified the exchange for anybody who hasn’t yet realized that LeBlanc was in on the joke.

“Some people on Twitter are not what you would call sophisticated. A lot of them actually believed that Matt was really mad at me,” Kimmel said on Monday in response to mean tweets from viewers bothered by the bit.

Kimmel presented the award for Outstanding Lead Actor in a Comedy Series, which ultimately went to Jeffrey Tambor for his role in “Transparent.” However, before announcing the actual winner, Kimmel joked that he could say Le Blanc’s name even if he wasn’t the actual winner because no one knows whose name is actually on the winners card.

Before handing over the Emmy to “Transparent” star Jeffrey Tambor, Kimmel cracked that he could say Le Blanc’s name even if he wasn’t the actual winner, because no one knows whose name is actually on the winners card. He then cut out the winner’s name from the card and ate it.

“Am now convinced Jeff Bridges is a crazy f–cker and not in a cool way, just in a disturbed hobo shouting at sparrows and sidewalks way,” the Dude of “Big Lebowski” fame read.

“If you find Benedict Cumberbatch attractive, i’m guessing you’d also quite enjoy staring directly at a cat’s anus,” Cumberbatch read aloud before adding: “Well, someone did, and she put a ring on it.”