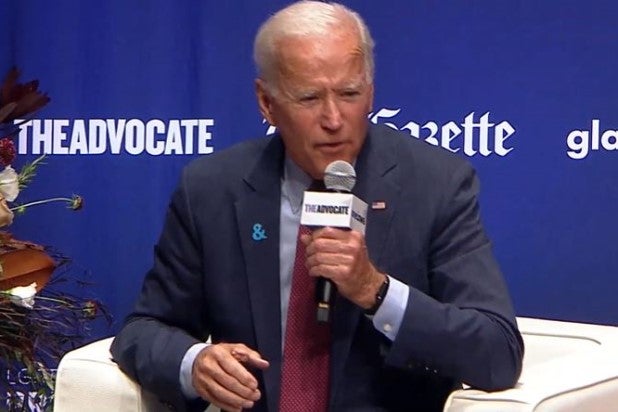 Joe Biden said on Friday that he addresses Donald Trump with the respect to which the office of the President is entitled, even though he doesn’t think Trump is “all that decent.”

Biden made his comments as he and several other top Democratic presidential candidates — including rivals Pete Buttigieg, Kamala Harris, and Elizabeth Warren — were in Cedar Rapids, Iowa for the LGBTQ Presidential Forum.

Cedar Rapids Gazette columnist Lyz Lenz asked the former vice president, “You have praised Vice President Mike Pence as a ‘decent guy.’ It goes without saying Pence is opposed to LGBTQ rights. How can LGBT people trust that you won’t compromise on issues that put them at risk in order to reach across the aisle to people like Pence?”

WATCH: Fmr. VP Biden is asked at LGBTQ presidential forum why he should be trusted not to compromise on issues, following statements Biden made praising VP Pence as a “decent guy.” pic.twitter.com/u88WbzCKYj

Biden responded that he was the first legislator to support gay marriage before anyone else did nationally. Biden added that he never had to “evolve” — he’s always advocated for LGBTQ rights.

He told an anecdote about applying to a job as a teen and seeing two men kiss. When he asked his father about what he saw, the elder Biden responded, “Joey, it’s simple. They love each other. Period.”

“To refer to someone on the other team as being ‘decent’ — it’s a way in which you usually speak when you try to get things done,” Biden explained.

“I still call President Trump ‘president,’ but I don’t think he’s all that decent,” Biden said to applause.

While Biden didn’t address the Ukraine reports in Idaho, he did release a statement earlier in the day. “If these reports are true, then there is truly no bottom to President Trump’s willingness to abuse his power and abase our country. This behavior is particularly abhorrent because it exploits the foreign policy of our country and undermines our national security for political purposes,” the statement said.

“Such clear-cut corruption damages and diminishes our institutions of government by making them tools of a personal political vendetta. At minimum, Donald Trump should immediately release the transcript of the call in question, so that the American people can judge for themselves, and direct the Office of the Director of National Intelligence to stop stonewalling and release the whistleblower notification to the Congress,” it continued.
In addition to boasting about his previous legislative record on LGBTQ rights, Biden added that he would undo all the restrictions implemented by the Trump administration, sign the Equality Act ensuring equal rights for LGBTQ individuals, allow prisoners to be assigned to prisons that match their gender identity, outlaw attempts at gay conversion, and have his health care plan cover gender transition surgery.