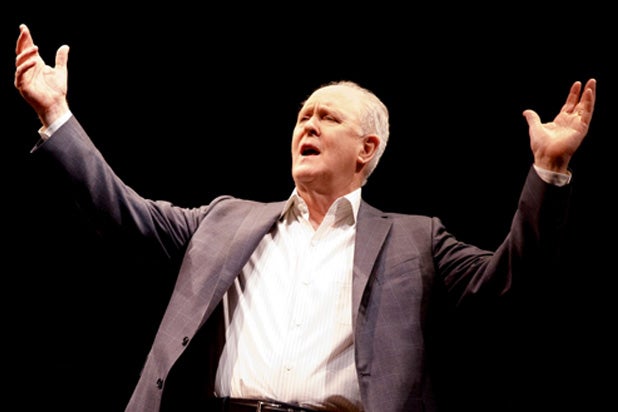 Something tells me that the venerable Roundabout Theatre Company had a hole in its calendar — how else to explain the placement of the well-intentioned but ill-proportioned one-man show “John Lithgow: Stories by Heart” at the American Airlines Theatre on Broadway?

The wonderful Emmy-winning actor has been touring versions of the show — sometimes one act, sometimes two — for about a decade now. And he’s gotten it to a good-as-it’s-gonna-get place. But this modest celebration of the joys of storytelling, which opened Thursday, is at its heart a chamber piece that feels woefully out of place in a Broadway theater.

The show mostly consists of Lithgow reciting two short stories — one by Ring Lardner, the other by P.G. Wodehouse — from a well-worn hardcover volume that his itinerant actor father had used for family storytime when young John and his three siblings were growing up. (His too-short introductory asides on his upbringing, his family and early introduction to the theater are by far the strongest part of the show.)

It doesn’t help that Ring Lardner’s “Haircut” — a monologue by a gossipy small-town barber describing the goings-on of locals who initially seem merely quirky but increasingly emerge as sinister — is a bit of a snooze, despite Lithgow’s best efforts to pantomime the barber’s sharpening of the razor and supplement his chat with snip-snip sound effects.

The second-act tale, a daffy Wodehousean gem about a chap named Pongo Twistleton and his rascally uncle Fred, at least allows the agile comic actor to embody about a dozen different characters (and voices) and to bound about the wood-paneled stage in a state of controlled semi-chaos.

But this is the sort of performance that would play better in the Lithgow family living room, or even in a televised version in your TV room at home. At one point, he even shows off the actual volume of short stories that he inherited after his father’s death, with the re-taped binding and marginalia intact — but tellingly, only theatergoers in the first couple of rows could see it.

Like that moment of show-and-tell, the not-inconsiderable pleasures of “Stories by Heart” are entirely too slight for a Broadway house, like a championship Scrabble game held in Madison Square Garden.

10 Worst Theater Productions of 2017: From Michael Moore to 'Amelie' (Photos)