“We didn’t make the movie to push buttons,” Phillips told TheWrap’s editor-in-chief, Sharon Waxman, in an interview last Friday about the filmmaking process. “I literally described to Joaquin at one point in those three months as like, ‘Look at this as a way to sneak a real movie in the studio system under the guise of a comic book film’. It wasn’t, ‘We want to glorify this behavior.’ It was literally like ‘Let’s make a real movie with a real budget and we’ll call it f–ing Joker’. That’s what it was.”

But the movie, which premiered at the Venice Film Festival in August and received an eight-minute standing ovation, is already kicking up controversy for its dark tone. The plot focuses on an irredeemable villain who escapes punishment. The film’s detractors say it creates an its all-too-realistic reminder of the angry loners who have been committing mass shootings in our country.

Though “Joker” has yet to hit theaters, film critics have already described its depictions of violence. In a scene described by TheWrap critic Alonso Duralde, Phoenix’s character incites a mob of protesters after a violent act on a subway. “But this act of violence makes Arthur feel seen for the first time,” he wrote.

Last week, families of victims killed in the 2012 mass shooting at a movie theater in Aurora, Colorado, wrote a letter to Warner Bros., the studio behind ‘Joker,’ calling for donations to gun-victim charities because of the film “presents the character as a protagonist with a sympathetic origin story.” The mass shooting occurred during a showing of the Batman film “The Dark Knight Rises.” The shooter, James Holmes, was likened to Joker for his bleached orange hair and voicemail he left at a private-gun range a month before the mass murder. 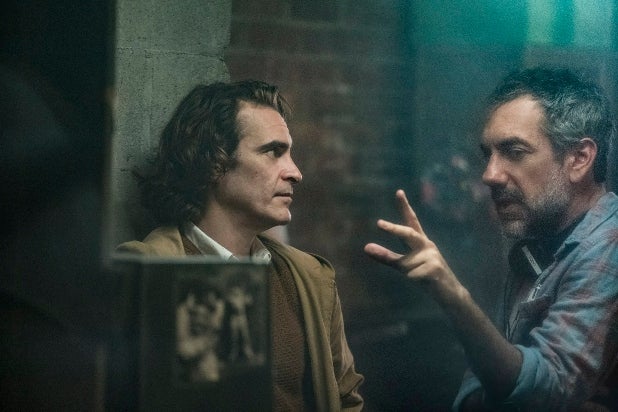 Joaquin Phoenix and Todd Phillips on the set of Joker (Courtesy of Warner Bros.)

Warner Bros. responded to the letter, saying that “Joker” was not meant as an endorsement of real-world violence.

“Gun violence in our society is a critical issue, and we extend our deepest sympathy to all victims and families impacted by these tragedies. Our company has a long history of donating to victims of violence, including Aurora, and in recent weeks, our parent company joined other business leaders to call on policymakers to enact bi-partisan legislation to address this epidemic,” a representative from Warner Bros. said in a statement on Tuesday. “At the same time, Warner Bros. believes that one of the functions of storytelling is to provoke difficult conversations around complex issues. Make no mistake: neither the fictional character Joker, nor the film, is an endorsement of real world violence of any kind. It is not the intention of the film, the filmmakers or the studio to hold this character up as a hero.”

A U.S. Army Base at Fort Sill, Oklahoma, has also warned about the film’s violence at an upcoming showing, saying in a memo to commanders Monday: “Commanders need to be aware of this threat for Soldier and family safety and to increase situational awareness should they choose to attend the release of this movie.”

Phillips thinks that people as a whole are waiting for a target they can pounce on — and “Joker” may be an obvious one. And in this case, it’s not about the right-wing targeting Hollywood movies over guns — it’s broader than that.

“I think it’s because outrage is a commodity, I think it’s something that has been a commodity for a while,” he said. “What’s outstanding to me in this discourse in this movie is how easily the far left can sound like the far right when it suits their agenda. It’s really been eye opening for me.”