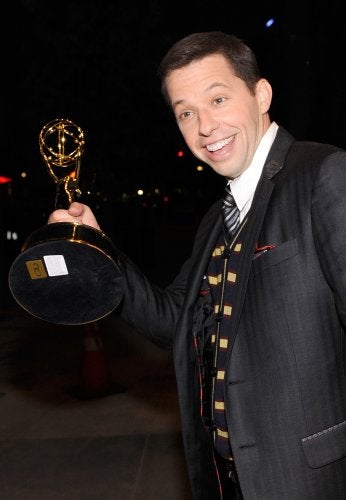 Is Charlie Sheen the creator of his own misery or is there something in the water on the set of "Two and a Half Men" that brings out bad behavior?

While Sheen had his Colorado hearing to relax a domestic-violence restraining order pushed back to next week, his sitcom co-star Jon Cryer reportedly was crying “Hitman.”

According to several celebrity gossip sites, the show’s set was closed to audiences and outsiders alike last Friday following the emergence of a “threat.”

While there are few details of the incident, according to at least one site, the nastiness arrived in the form of an angry individual who had to be ejected after threatening Cryer.

CBS TV, which airs the show, has not responded to a query about the incident.

Now TMZ reports the FBI has entered the case. (Bureau spokeswoman Laura Eimiller, responding to a query, said that in accordance with FBI policy she would neither confirm nor deny an investigation is in progress.)

For the past week speculation has focused on Cryer’s ex-wife, British-born actress Sarah Trigger. (Cryer is now married to TV news personality Lisa Joyner.) In May 2009, Hermosa Beach police arrested Trigger for felony child neglect in regard to a child belonging to her and her present husband.

The 2-year-old was reportedly found with a rope around his neck, along with cord markings on his skin. (A spokeswoman from the District Attorney’s office says there is no record of Trigger having been charged with a crime.)

Now, Cryer allegedly is claiming Trigger is making life hell as the couple battle for custody of their son, Charlie, of whom Cryer gained temporary control following Trigger’s arrest. The comedy star reportedly is suggesting that Trigger may even want to have him taken out by a paid assassin in order to win custody.

Trigger’s attorney, Vicki Greene, tells TheWrap she’s only heard of the hitman allegation today from reporters who have called her.

“I think that’s a horrific allegation and has no basis whatsoever,” Greene says. “People are jumping to conclusions they shouldn’t be jumping to. I don’t know if it’s coming from Jon or his people.”